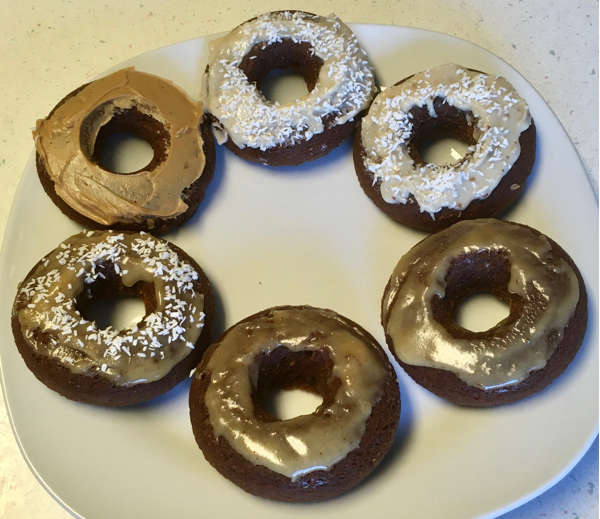 Want a vegan doughnuts recipe that’s baked? This is the one! A recipe for gluten-free doughnuts? Ditto! A vegan donut recipe without yeast? Check, check, check! Whether you call them doughnuts or donuts, finding doughnuts that are both vegan and gluten-free isn’t easy. Add in ‘yeast free’ and baked and you may have given up. Well here it is, the vegan, gluten-free, yeast-free, baked doughnuts recipe you’ve been looking for. And they’re delicious! And easy to make, and economical! What more could you ask??

Now, some people find the idea of making doughnuts, baked or otherwise, daunting. Please don’t be daunted, these doughnuts are incredibly easy to make! Really! And of course far more healthful for you than fried doughnuts. In fact one of the great things about making your own food is that you know exactly what goes into it, and can leave out all of those nasty ingredients that commercial manufacturers put in our food in order to preserve the food on the store shelves, and in order to save money.

Of course, to make baked doughnuts you need doughnut baking pans. The nice thing is that they aren’t expensive – we use these Wilton doughnut baking pans, they are only $20 for a set of two six-doughnut pans, so you can make a dozen at a time if you like. And once you have the pans, your own homemade baked doughnuts are not only so much more healthful, and so much more delicious, but they are so much less costly! Homemade baked doughnuts are dimes on the dollar compared to store-bought donuts. And you can whip them up in less time than it takes you to go buy doughnuts at the store (unless you live right next door to a doughnut shop, we guess). 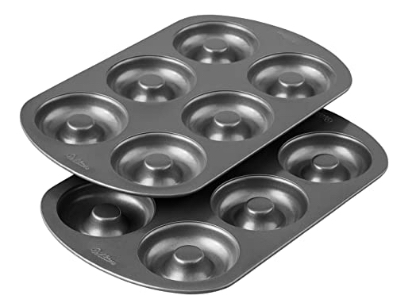 This recipe calls for applesauce in the batter, and we also include cinnamon as an optional ingredient. In our experience if you include the cinnamon it somehow brings out the apple flavor a bit more, and you will end up with a cinnamon apple doughnut. If you don’t want a cinnamon apple doughnut, omit the cinnamon; the apple flavor can take a back seat to other flavors. We like adding in a bit of nutmeg for a change; experiment with other spices and add-ins!

Place the dry ingredients (the almond flour, tapioca, and baking soda, and the cinnamon if you are using it) in a bowl, and, using a whisk, mix until well-blended.

Mix in the liquid ingredients (the applesauce, maple syrup, oil, and vanilla – but not the apple cider vinegar).

Once everything else is mixed in, mix in the apple cider vinegar.

Spoon the doughnut batter into a large Ziploc-type zipper plastic bag (if you happen to have a pastry bag use that instead, with no tip). Cut one of the corners off the plastic zipper bag – just enough to make an opening about a half-inch wide.

Gently squeeze the batter into each doughnut form.

Bake on the center rack for 20 minutes, rotating the pan halfway through. If you find that the doughnuts come out too dry, then next time after rotating the pan gently place a piece of aluminum foil on top of the pan to cover it.

Remove the pan from the oven, and let cool completely before removing the doughnuts from the pan.

Once you have removed the doughnuts from the pan, you can leave them plain, or frost them with a frosting of your choice. In our picture below we have frosted a few with maple syrup mixed with a bit of vegan powdered sugar, a couple with plant milk and vegan powdered sugar, and smeared one with peanut butter. And, oh yeah, we sprinkled some with shredded coconut. :~)

Let us know with what you have topped your delicious baked vegan, gluten-free doughnuts! 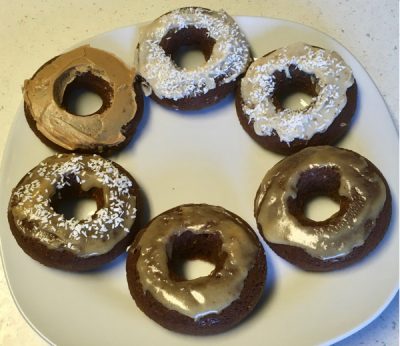