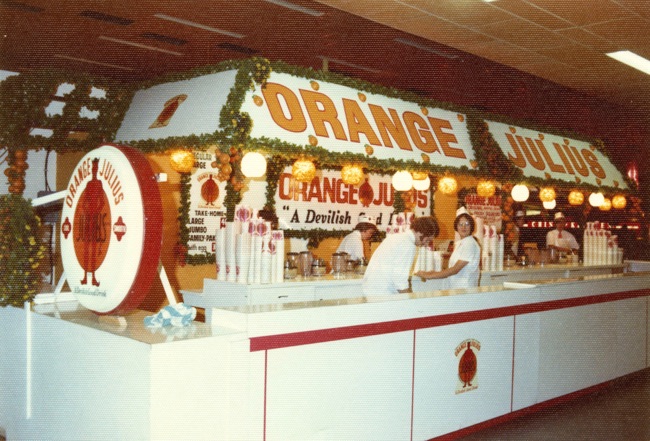 Of course, Julius Freed would probably turn over in his final resting place at the thought of orange juice powder. After all, the Orange Julius slogan (or at least one of them) is “Keeping it real since 1926”. Yes, Orange Julius has been around since 1926! According to the Orange Julius website “It all started [in 1926] with a guy who really liked oranges. People called him Julius Freed. Julius liked oranges so much, in fact, that he opened his very own orange juice stand. Sales were slow. But Julius was not alone. He had a friend named Bill Hamlin. Bill also really liked oranges, but they upset his stomach. So Bill got an idea: he blended his orange juice with a few choice ingredients to make it less acidic. It also happened to make it frothy and delicious.Bill introduced the drink to Julius. Julius introduced the drink to his customers. His customers introduced their friends. And soon the store was lined with thirsty fans shouting, “Give me an orange, Julius!” Sales went through the roof and an original was born.”

All that said, he would probably also spit at the thought of using frozen orange juice concentrate, as the original Orange Julius that Julius served was made with fresh-squeezed orange juice. If you want to do that, we include directions for that too. And, by the way, for an automatic citrus juicer you simply can’t go wrong with one of these old-fashioned Proctor Silex automatic juicers. This is an eBay link because, just as with food processors, we prefer to buy old (vintage) appliances from when they were made to last. We have two of these juicers (one for regular use, and one as a backup because they don’t make them any more). If you prefer a highly-rated new automatic juicer, the EuroLux automatic citrus juicer is very highly rated and often on sale for about $55 (usually $99).

Super Secret Ingredient Note: If you want this to taste like the Orange Julius you remember from your childhood, or to otherwise take it up a notch, add 1 Tablespoon vegan instant vanilla pudding!

Put everything in a blender and blend just until smooth. (This is an example of where our now beloved Ninja Foodi smoothie blender is amazing, because we can start it blending and just walk away until it’s done!)

Serve and drink right away. 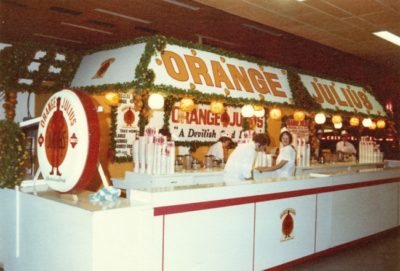