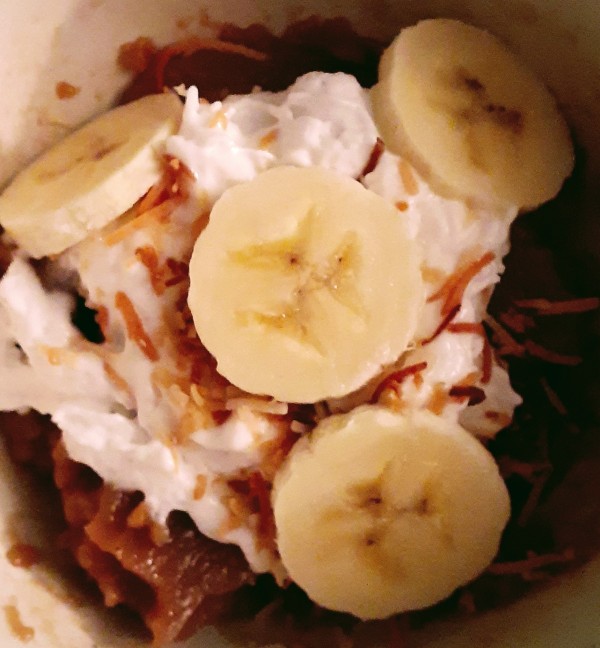 If you have a hankering for some vegan, gluten-free banana pudding, we’ve devised the perfect recipe for your tastes. It’s sweet, smooth, and incredibly easy to prepare. The recipe requires only a few ingredients, some of which you probably already have. And it’s a great way to use up any extra bananas that might be lying around your kitchen!

Our yummy pudding can be eaten plain, or with vegan whipped cream, or vegan wafers. We garnished ours with shredded, toasted coconut. Highly recommended! You won’t be able to stop eating this dessert.

1/2 cup turbinado sugar (which is always vegan, unlike some white sugars)
4 tablespoons cornstarch
1/8 teaspoon sea salt
1 tablespoon vanilla extract
2 cups plant milk (we used a combination of almond and coconut, but any will do)
2 sliced bananas
vegan whipping cream (Pro tip: Reddi-Whip makes a great whipped cream with coconut instead of dairy!)
1/4 cup shredded, toasted coconut (optional, toast in a small pan inside your oven for 2-3 minutes until it browns slightly)
vegan, gluten-free vanilla wafers (optional)

Combine the sugar, cornstarch, and sea salt together in a large saucepan. Place the pan on your stovetop and gradually pour in the plant milk, stirring constantly to avoid lumps.

Just when you start to think nothing will happen, your concoction will suddenly thicken to a pudding-like consistency. Stir for a minute or two longer. The pudding should coat your spoon. Turn off the burner and remove the mixture from your stovetop.

Pour in the vanilla extract and let the mixture cool on your counter. Note: though you may be tempted to put the pudding in your refrigerator to speed up the cooling process, please refrain from doing so! The pudding will coagulate and lose its creamy texture. Be patient!

Scoop the pudding into a large bowl and top with the vegan whipped cream and sliced bananas. Sprinkle on the optional, toasted coconut shreds, and top with vegan, gluten-free vanilla wafers if you desire. We decided to forgo the wafers, but they do make for a traditional banana pudding, so you might opt to go all the way.

Spoon your dessert into some bowls and enjoy! This recipe makes about four large servings. So delicious!

The pudding is unlikely to last more than a day or two, but be sure to cover and refrigerate any leftovers when you’re not devouring them! As I noted, refrigeration will sacrifice some of its creaminess, so eat as much as you can right away! We don’t imagine you’ll have too much trouble accomplishing this feat. Enjoy! 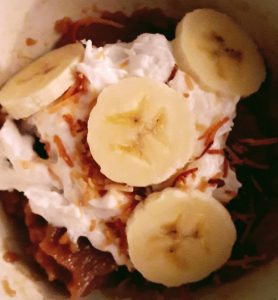