(Note: This recipe is vegan AIP friendly. Please note that not all recipes on this site are AIP compliant, although they are all vegan and gluten-free.)

This recipe for easy Thai-inspired coconut ginger lime soup came about almost as an afterthought. We’ve been sick here in the HGFV household, and so we have been drinking a lot of cold-killing Brahmastra juice. Which means that we have a lot of fresh ginger around.

A few days ago, thinking about what to do with all of this fresh ginger (we had nearly two pounds of it!), I suddenly got a hankering for a Thai-type coconut lime ginger soup. 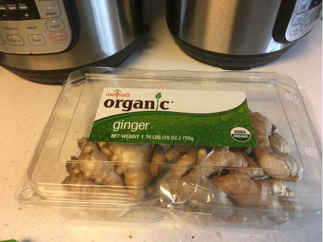 I was also still super-sick, so it had to not only satisfy my hankering, but be so easy to make that it would almost make itself.

That’s when I realized that I had an open container of So Delicious organic unsweetened coconut milk ‘beverage’ in the fridge, and my already fevered brain went full speed at a feverish pitch. I already had limes and, of course ginger. 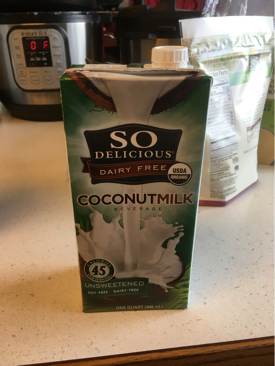 That said, now I only use our easy homemade, vegan AIP friendly coconut milk!

A bit of vegetable broth, a dash of salt, and a handful of fresh cilantro, and we were in business!

Now, I like to experiment, and I am always prepared for my experiments to turn out less than ideal (read as “awful”). To be perfectly honest, I didn’t really have much hope for this, because I know that authentic Thai soups use full-fat coconut milk or coconut cream, often use kaffir lime, and lemongrass. Plus, it’s coconut milk beverage for goodness sake, how good could it turn out? Yeah, I was pretty sure it was going to turn out awful.

But I didn’t care, it was an experiment. Plus, I still (almost) always will eat my own experiments, I just wont inflict them on others. :~)

So I took two cups of the So Delicious coconut milk beverage, and two cups of vegetable broth, added about four inches of the ginger root, peeled and cut in strips, and a handful of fresh cilantro leaves, and chucked them all in my Instant Pot with a dash of salt (don’t worry, I include stove-top instructions below too :~) ). When it was done cooking (see instructions below) I squeezed the juice of a lime into it, stirred it, and tasted it.

But the real test was my guy. He’s kind, but will also let me know if he doesn’t like something (pretty much the best combination an experimenting cook can have in a guy!)

He took a sip and said, and I quote:

With that stamp of approval I present to you, without further ado, the recipe and instructions for this delicious (and very low calorie! The coconut milk beverage has only 45 calories per cup, and the broth only 15 calories per cup!) Thai-inspired coconut ginger lime soup!

2 cups unsweetened coconut milk beverage (the kind in a box, not in a can, that’s something different! Even better, make our easy homemade, vegan AIP friendly coconut milk!)
2 cups vegetable broth (we really like the Imagine “No Chicken” broth)
4 inches of fresh ginger, peeled and cut into 1/8-inch strips
Handful of fresh cilantro leaves
Dash salt
Juice of 1 fresh lime

Remove from heat, stir in lime juice, and serve. 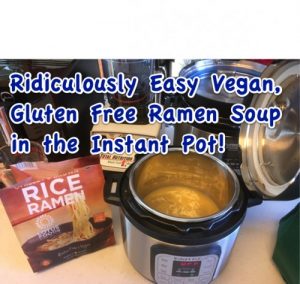 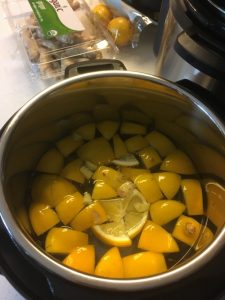 Recipe for Brahmastra Juice (Indian Ayurvedic Cold Killer Remedy), the Science Behind It and How to Make it Vegan AIP Friendly – Stove Top and Instant Pot