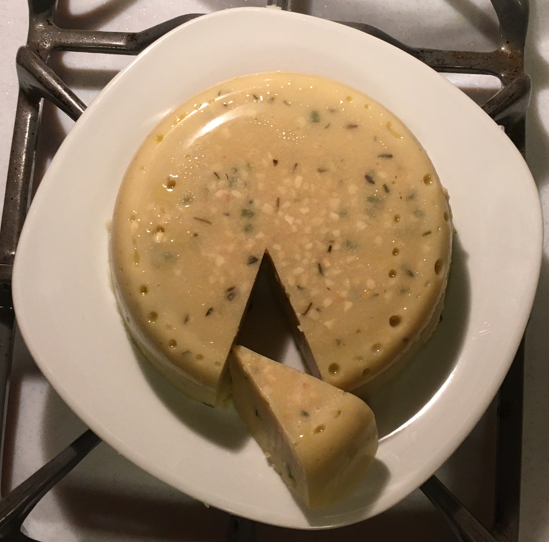 We started looking into making homemade vegan cheese recipes out of necessity: nearly all of the commercially available vegan cheeses have potato starch in them, which we need to avoid. Previously, when looking into making homemade vegan cheeses, it seemed, frankly, like too much hassle, along the lines of beer making or artisanal bread baking or home coffee roasting. Not that there is anything wrong with any of those endeavors, but they require a commitment to craft. We just wanted some cheese that we could eat, dammit.

Recently we started looking into it again, specifically looking for ways to make cheese ‘quick and dirty’. Ok, maybe quick and clean. And potato-free. A lot of recipes out there, even the simpler ones, use a cashew base. Don’t get us wrong, there’s nothing wrong with cashews – some of our best friends are cashews.

As it happens, we have a lot of canned coconut milk at home, in part because for quite a while we were doing the Vegan AIP diet, and in part because now we are making our own homemade coconut milk (we get this killer deal for 25 pounds of Let’s Do Organic coconut flakes for just .20 an ounce!), so we weren’t using up the cans.

So we started looking at various recipes using coconut milk as a base, and then riffed on them to develop our own. It is likely that you already have all of the ingredients in your pantry, except for maybe agar agar (the vegan thickener so good, you have to say it twice, although from here on out we will just refer to it as ‘agar’), which you can buy at any health food store, or here on Amazon. Here’s the recipe.

First, figure out what you are going to use for a cheese mold for your cheese. For this particular one we used a Pyrex bowl with its own lid, although you can get cheese molds on Amazon. Whatever you use, wipe the inside very lightly with a light oil, unless you are using a silicone mold, which shouldn’t need greasing.

1 teaspoon yellow, Dijon, or horseradish mustard, depending on taste (optional, and omit if doing AIP)

Flavor add-ins: nearly anything you want, the cheese in the picture has marjoram, thyme, parsley, dried chives, and minced garlic.

NOTE: Some recipes call for up to 1/2 cup of water as well, along with the coconut milk, while others do not. For this cheese we did include the 1/2 cup of water, but next time we will try less, or even none at all.

Place all ingredients except the agar in a medium saucepan, and whisk until fully mixed. Then mix in the agar, and turn the stove on to medium.

Bring mixture to a slow boil, whisking constantly, then turn the heat down so that the mixture just simmers, and continue whisking for 5 minutes.

Remove from heat, and pour into your cheese mold. 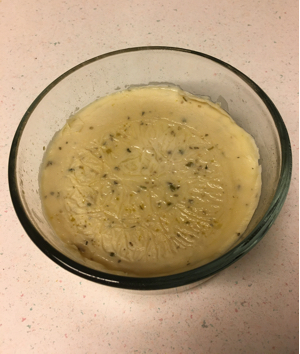 Let cheese cool a bit so that when you cover it it doesn’t rain condensation on it. Once cooled enough, cover and put in the fridge.

Note that a slight “skin” may appear to form on your cheese while it’s cooling, it’s ok, it doesn’t affect anything, it will probably disappear when the cheese is fully hardened (it does for us), and in any event, that’s going to be the bottom of your cheese when it’s done, so nobody will see it. ;~)

That’s it! Your yummy vegan cheese will get hard in the firdge, and be ready to eat in a few hours! 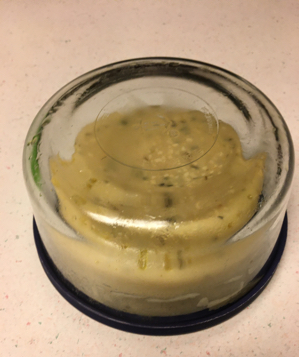 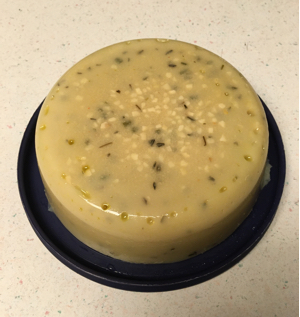 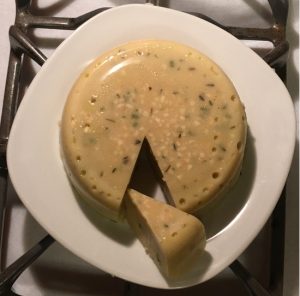 Crackers and cheese, anyone? 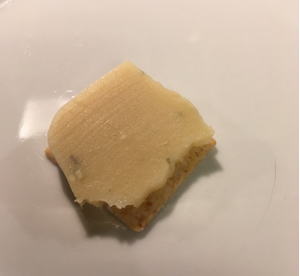 More than any other, we took our cues from the coconut milk cheese recipe at Hidden Veggies; although ours is different we were very impressed with that one as well.

NOTE: Some links on this site to products on Amazon may be what are known as affiliate links, meaning that they may earn us a small amount if you purchase through them, to help us keep the site free for you, but it does not affect the price to you on Amazon at all.