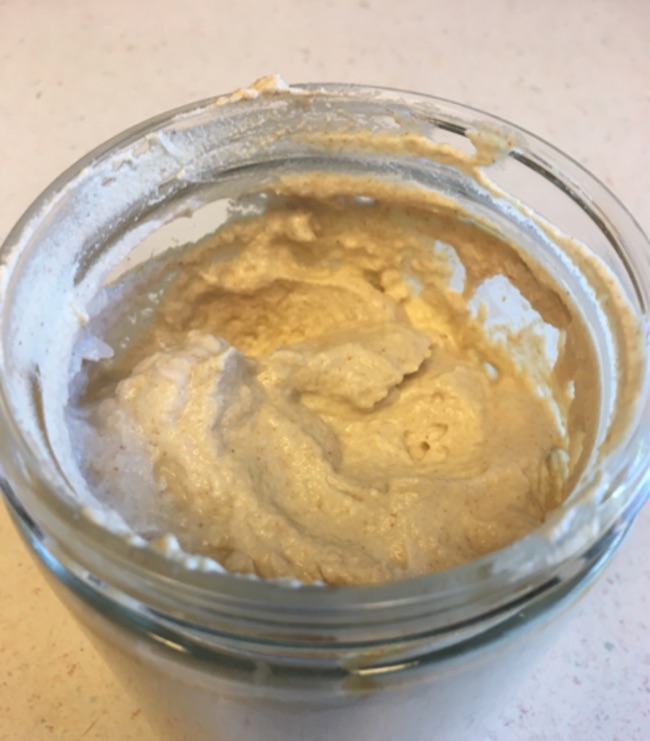 We love the simplicity of making soy yogurt in the Instant Pot (dump soy milk into jar, add some starter, set and forget) and wanted to find an equally easy-to-make, non-complicated, with no other ingredients, no heating first, etc., non-dairy non-soy Instant Pot (or not) yogurt. In short, we wanted it to be exactly as easy to make as soy yogurt, only not be soy.

Making Soy Yogurt in the Instant Pot is So Easy! 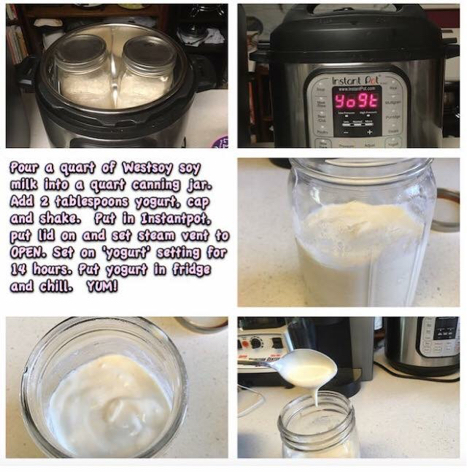 This led us on a search through various Instant Pot almond milk yogurt recipes, all of which required thickeners or required making homemade almond milk, or both.

NOTE: Nearly all of the homemade almond milk recipes use a proportion of 1 cup of almonds to 4 cups of water. Remember that, as we will refer to it again in a bit.

Then we found instructions for making homemade almond milk using the Instant Pot, and we got a little more interested. After all, just about anything you can make (foodwise) can be made easier with the Instant Pot, right?

And then someone told us that they make homemade almond milk (to drink, not for yogurt) without having to strain it at all, by using their Vitamix (although any high-powered blender should do).

So we gave it a whirl (pun intended), and while the almond milk was delicious, and the resulting yogurt was tasty, it wasn’t really yogurt – it was basically kefir, having the consistency of a smoothie (and a thin smoothie at that), not at all thick like even a runny yogurt. We had read that subsequent batches of homemade almond milk yogurt will get thicker with each generation (assuming you are using some of the previous generation as your starter for your next generation), and that may be true, but this stuff was so thin that we couldn’t imagine how long that would take to get to generation X (5 batches? 15?) before it was thick enough to spoon out.

Now, we happened to know from making soy yogurt that there are two brands (and so far as we know only two) that have nothing in them but soy and water, which is the sort of soy milk you need to make soy yogurt in the Instant Pot (if it has anything other than soy and water it may not work). We further happened to know that of those two brands (WestSoy and Eden Soy), the Eden Soy yields a thicker yogurt because it has more protein.

“Hrrrm,” we thought, “if that’s the case, then perhaps having a higher almond-to-water ratio (and thus more protein) would also yield a thicker almond milk yogurt! (Remember that the standard ratio was 1 cup of almonds to 4 cups of water – see, we told you that we would refer back to that!)

In addition to upping the amount of almonds, we did away with removing the peel, did away with the straining, and included the water in which the almonds are soaked. All of this led to a higher protein almond milk and… wait for it… a thicker yogurt! Tah dah! And, of course, it also makes it super-easy! Turns out that the easier the steps, the thicker the yogurt! You have to love that!

1 cup almonds (we use organic almonds from Costco)
1 cup water plus more water for later
2 – 8 tablespoons plain vegan yogurt (any type) as a starter, the amount depends on how many jars you are going to make (we have not tried this with a probiotic or powdered starter)

Place the almonds and the 1 cup of water in your Instant Pot, lock, close the vent, and set to manual 1 minute (yes, that’s right, just one minute). NOTE: If you don’t have an Instant Pot you can boil the almonds in water for 5 minutes, although the results may not be exactly the same.

Allow to natural pressure release (NPR) or if you are in a hurry allow to NPR for at least 10 minutes, then quick release (QR).

Now, put the almonds, along with the remains of the water in which you pressure cooked them, into your Vitamix or other high speed blender. Add 1 to 2 cups of water, and blend the bejeezus out of it. With our Vitamix we start with variable speed, slowly cranking it up to the highest variable speed setting, and then from there go to high speed. Blend at high speed for at least a few minutes, to get it as liquified as possible. Then add more water until the total volume is 4 cups (1 quart), and blend just a bit more to get it fully blended.

The almond milk will probably be quite warm, so allow it to cool until it is at most lukewarm, room temperature is even better. If it is any warmer it can kill the starter.

At this point you have a delicious, nutritious, and clean almond milk. You can drink it straight, or do whatever you want with it. Of course, in our case what we want to do is make homemade almond milk yogurt in our Instant Pot!

IMPORTANT NOTE: The higher the almond:water ratio, the thicker will be your yogurt. If you want it thicker, reduce the amount of water; maybe start with a total volume of 3 cups of water rather than 4, and see what you think. Experiment!

Ok, let’s take a moment here to talk about the jars in which you will make your yogurt. We use these wide mouth 8oz (half pint) jars, for individual servings. While we have typically made soy yogurt in the Instant Pot in 1 quart canning jars, we went to pint jars recently, and then to half pint jars, which is what we have made this almond milk yogurt in. Four of these wide mouth, half pint jars will fit in the bottom of the 6-quart Instant Pot. If you put the lids on them tightly, you can fit 8 of them in the 6-quart Instant Pot by putting four in the bottom, upright, and then placing another four on top of those, upside down (they won’t fit right-side up because then the Instant Pot lid won’t fit, but the jars are just tapered enough at the bottom that if they are upside down they allow the Instant Pot’s lid to go on).

We don’t know how the almond milk yogurt will do in larger jars. 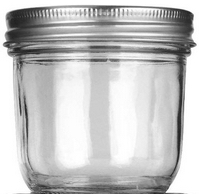 We’re going to assume you are using four 8-ounce jars as well. Of course you don’t have to, so if you choose a different type of jar, adjust accordingly. In truth, we only put two tablespoons of yogurt into a 1-quart jar when making soy milk yogurt, and it works fine. But right now that’s not what I’m doing with this almond milk yogurt.

In fact, we fully expect that as subsequent generations of this almond milk yogurt are made, and some of that subsequent yogurt is used as starter for yet another generation, we will cut down on the amount of starter yogurt used in each jar. But for now, we’re not taking chances, and so are using 2 tablespoons of starter yogurt for each 8-ounce jar.

So, assuming you are going to do what we do, put two tablespoons of plain vegan yogurt into each of the 4 jars, and then pour almond milk into each jar until it is nearly full. (Again, the starter yogurt can be any type, it does not have to be almond milk yogurt, so long as it is plain yogurt.) Either stir each jar well, or you can tightly place a lid on each jar, and shake each jar to mix the starter yogurt in with the almond milk. Then you can leave the lids on, or remove them, that is up to you (of course if you are going to stack a second layer of jars onto the first in your Instant Pot, you will have to leave the lids on – otherwise we personally prefer to leave the lids off so that condensation doesn’t form on them).

If you are using an Instant Pot, put the jars into your dry Instant Pot (in other words, do not put water in the Instant Pot), lock on the lid, open the vent, and press the Yogurt button. The default time for making yogurt in the IP is 8 hours, however we always do ours at 13 hours, so we don’t know how it will come out if you do fewer than 13 hours. When it is done, your Instant Pot will beep.

If you are not using an Instant Pot, then place them in whatever incubation method you are using (oven, dehydrator, etc.).

Either way, when the time is up, take the jars of yogurt out and put them in the fridge.

Our Instant Pot Almond Milk Yogurt in the Half-Pint Jar 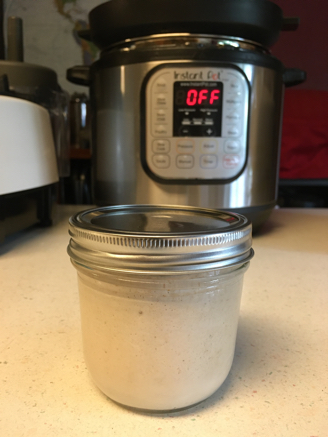 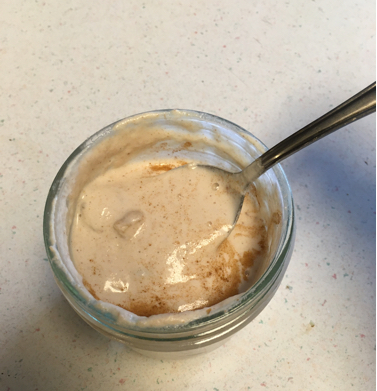