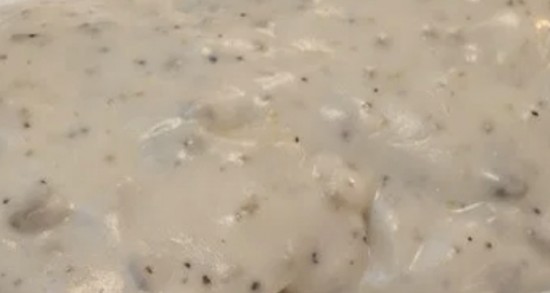 The problem with gravy is that it seems so fussy, even complicated or difficult to make. Add in gluten-free (after all, wheat flour is a staple of gravy), and vegan (ditto butter and, in the case of cream gravy, milk or cream), and it just all seems like too much. Well, the operative word here is “seems”, because this gluten-free vegan cream gravy recipe is fast, easy, and wonderful!

We seem to be on a gravy kick here at Chez Casa, because it was just a couple of weeks ago that we created our Incredible Vegan, Gluten-Free Mushroom Gravy about which we confessed that we couldn’t keep ourselves from eating it out of the pot with a spoon, because it was so darned good. 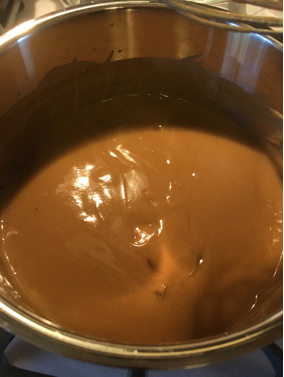 Even though both the mushroom gravy and this cream gravy are delicious, vegan, and gluten-free, they are very different. The mushroom gravy is broth-based, has several flavor enhancers, and relies on chickpea flour to thicken it, while this vegan cream gravy has just 2 main ingredients, and uses regular gluten-free all-purpose flour as its thickening agent.

Specifically, the flour we use in this recipe is Bob’s Red Mill Gluten-Free 1 to 1 Baking Flour, but to be pefectly honest that’s just because it was what we had in the house. You can probably use just about any gluten-free white flour substitute.

Now, this is the basic, or primary, if you will, cream gravy recipe. It stands on its own, but it can also be the canvas for your symphony of gravy flavor (to badly mangle metaphors). Throw in some vegan sausage (either store-bought or make your own with our Easy Vegan, Gluten-Free Breakfast Sausage Recipe), or some mushrooms. Try stirring in some nutmeg, or paprika, or a little dried thyme or savory. Really, the sky’s the limit!

Now, of course, this gravy is wonderful over biscuits, or mashed potatoes, or mock fried chicken, or really over just about anything fried.

How will you serve it?

*The fewer ingredients in the almond milk the better, our easy 2-ingredient homemade almond milk is great for this and is what we use.

Pour the olive oil into a heavy-bottomed medium pan.

Whisk the flour and 1/2 cup of the almond milk together until smooth. Heat the olive oil on medium-low, and slowly whisk the flour mixture into the olive oil, continuing to whisk until the mixture is smooth and starts to bubble. Once the mixture in the pan is smooth and bubbly, pour the rest of the almond milk into the pan, continuously mixing it with the whisk until it is fully incorporated. This is also the time to add any herbs or spices that you are going to add, but do not yet add anything chunky like vegan sausage or mushrooms; those go in at the end.

Continue to cook over low heat, whisking – if not constantly than at least regularly – until it is the thickness that you desire. Remove from heat immediately once it reaches your desired thickness.

Stir in any chunky yums that you plan to add (such as sausage or mushrooms) after removing from the heat.