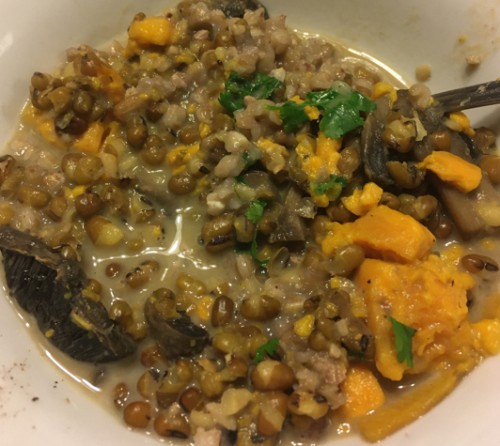 We recently threw this “what’s in the cupboard” dish together, and it turned out to be amazingly delicious. So much so that we even surprised ourselves! And not only was it delicious right out of the pot but it’s one of those dishes that is even better, if that’s possible, the next day! In fact, we both had the exact same thought the moment we each took our first forkful: “This is comfort food!”

There are certain things that we seem to always have on hand, and those include cans of unsweetened coconut milk, and sweet potatoes. Now, that right there is the foundation for a yummy concoction, because they go so very well together. Rummaging around the cupboard for something to add to them we discovered the dried mung beans, and some mushroom broth. That led us to grab the mushrooms that we had in the fridge, and it was on!

We love our Instant Pot, in no small part because you can cook dried beans in it without soaking them first! That makes spur of the moment meals that include dried beans not only possible, but a snap!

So here’s our recipe for the coconut milk, mung bean, sweet potato, mushroom dish that we created. We were tempted to call it a curry, but it doesn’t really have all the curry spices in it (although it could!) And it’s not really a stew (or maybe it is!) So we are asking you: what should we call it? Curry? Stew? Thing? One thing that we do know is that we call it delicious!

You can serve this over just about any thing you’d like: rice, quinoa, millet, even mashed potatoes. We actually served it over buckwheat that we cooked while the thing was going in the Instant Pot, and it was a perfect pairing (you can cook buckwheat pretty much as you would rice: one part buckwheat to two parts water, bring to a boil, lower heat and simmer, covered, for about 20 minutes).

Put everything except the cilantro into the Instant Pot, sprinkling the salt, pepper, and just a dash or two of cinnamon on top. Give it a stir, and then lock the lid on, close the vent, and set to manual, 25 minutes.

When time is up let the pressure release naturally.

Serve over whatever it is you are putting it over (or just eat it on its own!), top with fresh cilantro if you like (or don’t), and eat it up! Be careful, because this tastes so good that you will want to go back for seconds, and even thirds, even though you are full! 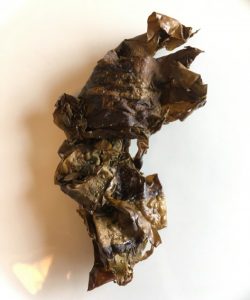 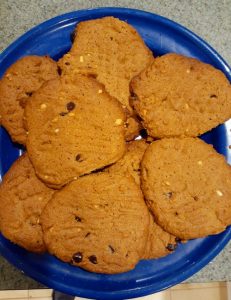