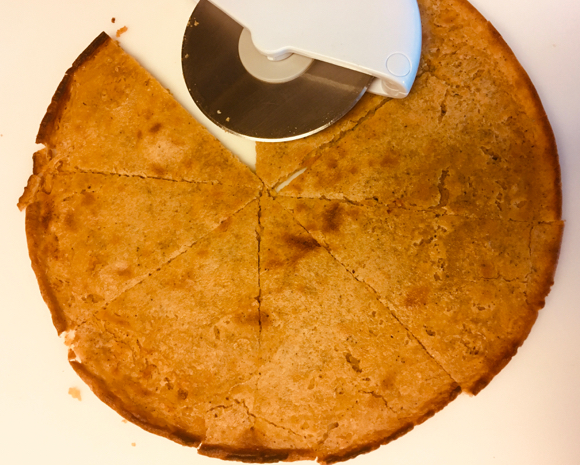 If you are looking for something gluten-free, vegan, and tasty that you can whip up in minutes, Farinata is it. This savory chickpea pancake, also known as Socca, Cecina, Torta di Ceci, Fainè, and Fainá, is nothing more than chickpea flour and water, salt and pepper. It’s how you cook it that makes it so incredibly scrumptious.

We have sung the praises of chickpea flour (also known as besan, particularly in Indian grocery stores) before. It’s what makes our incredible mushroom gravy so incredible, and what other staple allows you to make non-soy tofu in 5 minutes, at home, with just two ingredients, one of which is water? In fact, the very same ingredients that make chickpea tofu go into making Farinata, it’s just a different method of preparation! Also, the two recipes harken back to two different regions – chickpea tofu is also known as Burmese Tofu, whereas this chickpea oven pancake recipe originates from Italy. And legend has it that Roman soldiers cooked it on their shields.

Within Italy what you call this delicacy depends on the region you are from. According to Wikipedia, “In Nice and the Côte d’Azur, it is called socca, in Tuscany, cecina (“made of chickpeas”) or torta di ceci (“chickpea pie”) and in Sardinia fainè.”

There are also versions of Farinata in South America (primarily Uruguay and Argentina) where it is known as fainá and where, according to Wikipedia, it is “massively popular”

Of course it’s massively popular! It’s freakin’ delicious! And so easy to make! Here’s how.

You will need a round, heavy, flat-bottomed pan or skillet, 10″ to 12″ in diameter, that can go into a very hot oven for this recipe. Note that there are a few different methods for preparing Socca, so where this is the case we tell you what we do, and then what other method options may be.

Put chickpea flour, salt, and pepper into a blender, turn it on low, and slowly and steadily pour the cup of water through the top. Now drizzle the first two tablespoons of olive oil through the top of the blender. Continue blending, scraping the sides if need be every so often, until well-blended. Note that some recipes call for the water to be lukewarm – these recipes also have you whisk the ingredients in a bowl; the act of blending warms the mixture up just a bit, which is perfect.

Leave the mixture in the blender while you prepare the pan. Note that you can actually make this up to several hours in advance, and just leave it in the blender until you are ready to bake it.

To prepare the pan, put the other two tablespoons of olive oil in the pan, and either stick it in the oven until the pan is good and hot, or heat it on the stove top until, again, the pan is good and hot. Some recipes tell you to preheat the empty pan in the oven or on the stove, however so long as your pan is getting hot, we have found that is not necessary. The point is that you want the pan, not just the olive oil, to get very hot. This is so that as soon as the batter hits the pan it starts to form a crust (this is also the secret to making cornbread with a good crust).

We love our Lodge enameled cast iron pan for this! 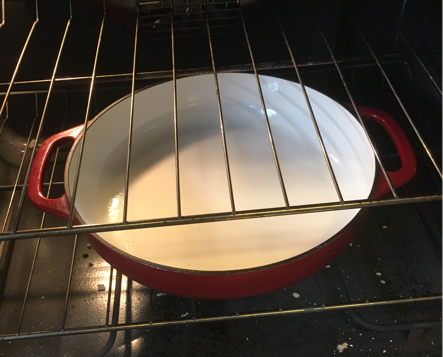 Take your very hot pan and swirl it to get the olive oil covering the bottom of the pan. Give your batter one last quick whirl in the blender (if you are going to add in anything such as rosemary or onion or whatever else, this is the time to add it), and then pour the batter into the pan, and swirl it to cover the bottom.

Bake for 12 or so minutes, until the batter is set firmly, and the edges are browned.

Remove from oven and, if you like, brush with a bit more olive oil. Then turn on the broiler and broil your Farinata for just a few minutes until it start developing those beautiful brown spots on top.

Take out and carefully slide out of the pan (be careful, it’s very hot!) Slice and serve warm.

1 thought on “Farinata or Socca or Savory Chickpea Oven Pancake – Vegan Gluten-Free Deliciousness by Any Name!”