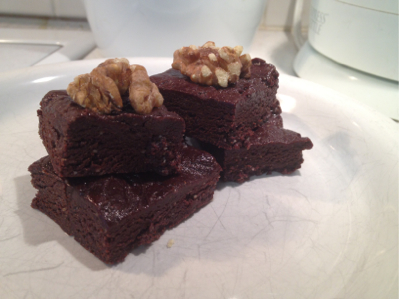 So, here is our recipe for gluten-free, vegan raw fudge (with raw cacao and dates!)

And you don’t have to freeze it!

Place nuts in a food processor with the S blade. Pulse until finely ground. Add in the raw cacao, and turn the processor on until the nuts and cacao are well-blended and are a fine powder.

Add in at least 4 and no more than 8 dates, depending on your taste. Process until uniform and the dates are fully incorporated into the mixture.

Now, turn the food processor on, and through the top start drizzling in agave, slowly, until the mixture comes together and forms a solid ball of dough. You want it to have the consistency of playdough.

Remove the fudge from the pan, and cut into squares.