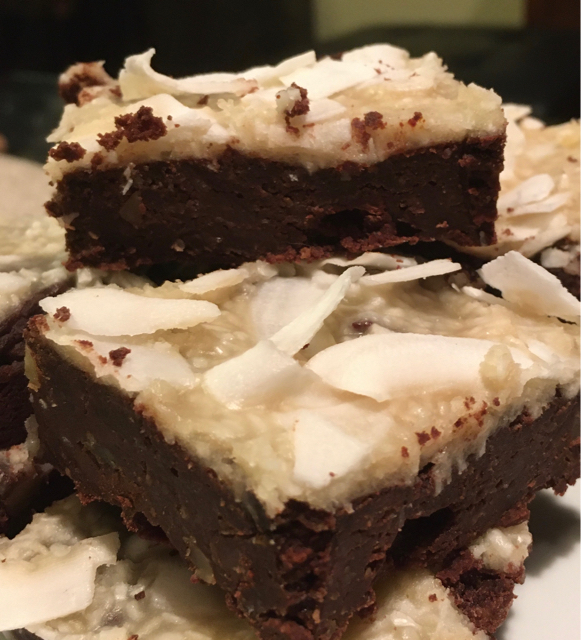 You will not believe how insanely incredible these gluten-free vegan German chocolate brownies are! And talk about fudgey! It’s like these brownies couldn’t decide whether to grow up to be brownies, or fudge, so they settled on being the best fudgey brownies ever!

Ingredients for the Brownies

Ingredients for the Frosting

1/4 cup each almond butter, maple syrup, solid coconut oil, and shredded coconut (we use unsweetened shreds that are really small, we haven’t tried these with the larger, sweetened shreds).

Place the almond butter, maple syrup, and coconut oil in a small bowl and whisk well. Within a few moments the coconut oil will liquify, at which point whisk until smooth, then mix in the shredded coconut, and then set aside.

Place the oats in a food processor fitted with an ‘S’ blade, and process until ground into course flour.

Spread the brownie batter in the greased 8×8 pan, smoothing it gently to make sure that it is evenly spread.

Bake the brownies for about 25 minutes, or until the edges just start to pull away from the pan. Then cool the brownies, in the pan, on a wire rack; make sure that they are completely cooled before going on to the next step.

With the brownies still in the pan, spread the frosting on the completely cooled brownies. If you have it, top with flaked coconut (this is completely optional).

Store in an airtight container, although you probably won’t be storing them for long because they will be all gone. :~) 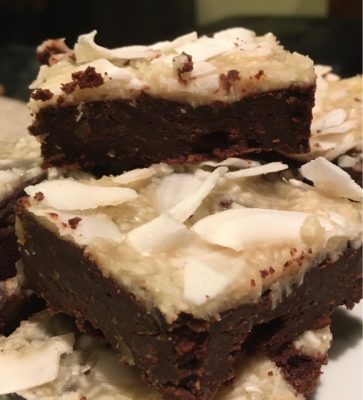 See more recipes in Dessert & Candy, Quarantine Recipes, Vegan Costco
Like this recipe? Please let us know by supporting us with a contribution (we use Paypal). We are always free, always reader-supported.

Happy vegans who liked this: 519