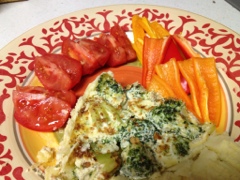 Ah, quiche. It’s one of those dishes that you may miss mightily after you’ve gone vegan. If only there were such a thing as a vegan quiche. If only it could be gluten-free. Well guess what, it can be both! Yes, it’s true! This recipe for gluten-free quiche is not just eggless but completely vegan! And not only that but it is an easy and delicious vegan quiche!

And despite not using any vegan cheese at all, it even tastes just as good – if not better – as that other quiche, cheese and bacon and all! The secret to that cheesy goodness is, of course, nutritional yeast.

Your family will love this quiche! Your friends will marvel! And you will be thrilled at serving them such a tasty and hearty quiche that is as healthful as it is delicious.

One gluten-free, vegan pie shell (you can also omit the crust altogether if you prefer)
8 ounces firm tofu (we use organic, sprouted tofu)
2/3 cup soy milk (or other alternative milk; we have only tested with soy)
1/2 teaspoon sea or Himalayan salt
1/2 teaspoon pepper
1/8 teaspoon cayenne pepper
1 tablespoon nutritional yeast
2 tablespoons vegan, gluten-free bacon bits (we like these ones)
1/4 to 1/2 cup diced onions
1 to 2 teaspoons minced garlic
10 oz frozen broccoli (or equivalent fresh and steamed to just al dente)

Place tofu and soy milk in blender and blend until creamy. Pour into mixing bowl and stir in remaining ingredients.

Pour into pie shell and bake for about 30 minutes or until crust edges are done and quiche is set. 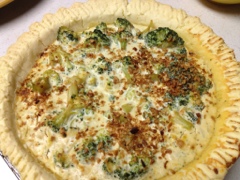 Article Name
Gluten-Free Vegan Quiche Recipe!
Description
Yes, Virginia, there is such a thing as vegan, gluten-free quiche, and it's delicious and easy to make! Your friends and family will love this recipe!