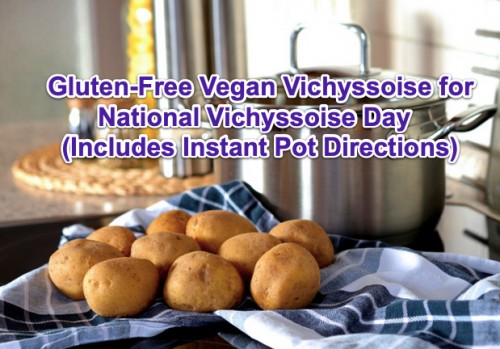 This vegan vichyssoise is naturally gluten-free, and just in time for National Vichyssoise Day! Of course, vichyssoise is also known as potato leek soup, because, well, it’s primarily made with potatoes and leeks! But it is also often made with butter and cream, which are decidedly not vegan. This vegan version is just as full flavored, and easy to make!

This soup can be served either hot, or, as is more traditional, chilled.

Note that these measurements are guidelines; people’s vichyssoise tastes vary – some like it more potatoey, some like it more leeky, some thicker, some thinner, some creamier, some less creamy. Play around with this until you have it just the way you like it.

2 to 3 leeks, thinly sliced (only the white and palest green part)
4 potatoes – we use 2 russet and 2 yukon gold to give it a buttery flavor
4 cups vegetable broth or vegan “no chicken” chicken broth
1 cup unsweetened vegan creamer such as Nut Pods or Ripple OR full-fat coconut milk
2 Tablespoons olive oil
2 Tablespoons vegan butter such as Earth Balance (optional)
salt to taste
pepper to taste

Heat olive oil in a large saucepan over medium heat, and saute the leeks until they are tender. Add in all of the rest of the ingredients except the cream, and simmer, covered, until potatoes are very soft, about 15-20 minutes.

Remove from heat, and with a stick blender puree everything (this is where you would add the vegan butter if you are using it), slowly pouring in the cream until the desired consistency and level of creaminess. If you don’t have a stick blender, let the mixture cool a bit and then put it in a blender or food processor.

If you are going to serve it warm, serve immediately, topped with chopped chives (optional). Otherwise chill, covered, in the refrigerator, until cold.

Heat olive oil in Instant Pot using Saute – Low. Add leeks and saute until tender. Turn Instant Pot off, and add in all of the rest of the ingredients except the cream. Lock on lid, and cook on Manual 5 minutes. Quick release, open the Instant pot, and puree the contents with a stick blender (add in the vegan butter here if you are using it), slowly pouring in the cream until it achieves the desired consistency. If you don’t have a stick blender, let the mixture cool a bit and then put it in a blender or food processor.

This makes a yummy lunch served with a salad and a gluten-free baguette. It also makes a lovely first course for dinner. 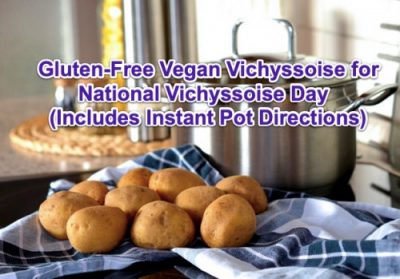 Happy vegans who liked this: 163