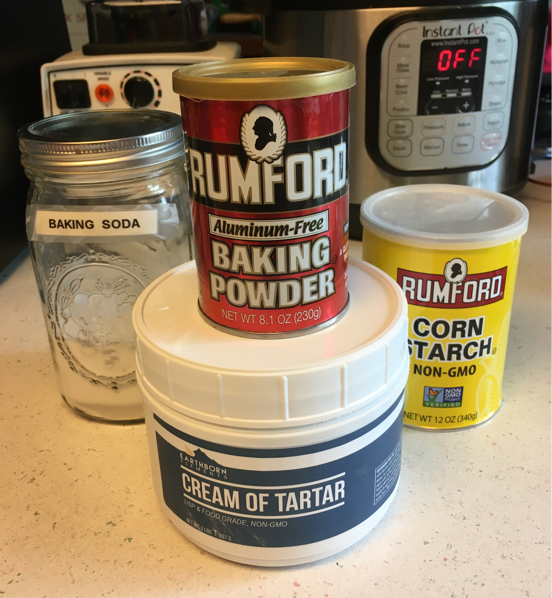 With this homemade baking powder recipe you will never again reach for that can of baking powder only to find that it expired years ago. Now, expired baking powder doesn’t go bad, per se – but it loses its potency, meaning that it loses its rising oomph, the ability to help lift your baked goods to lofty heights. Like, biscuits. 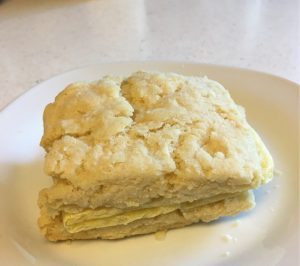 (That’s vegan Just Egg on that biscuit, which is from our Best Ever Vegan Gluten-Free Biscuit Recipe.)

We’re not food scientists, but according to Bakerpedia, “Double-acting baking powder has two types of acids, which react at different times during baking. The reaction adds volume to baked goods that don’t have acid in them, such as cookies or cakes. Baking powder is a leavening agent that contains a combination of alkali, acid and a moisture absorber. Double-acting baking powder contains two types of acids. The first acid reacts by creating gases when mixed with the liquid in the recipe. The second type reacts by creating gases when the batter is exposed to oven heat.”

Nearly all baking powders (commercial and otherwise) have sodium bicarbonate (baking soda) as one of the ingredients; commercial baking powders use either monocalcium phosphate or cream of tartar (which is what we use for this recipe). In the past some manufacturers instead used aluminum salts (not necessarily ideal), and also albumen (not vegan).

So, for our baking powder recipe we will use baking soda and cream of tartar. We also will use cornstarch (non-GMO, of course). Why cornstarch? Explains Bakerpedia, “baking powder contains sodium bicarbonate as the base, cream of tartar as the acid, and cornstarch. Because the base and acid react immediately upon the addition of water, cornstarch is added to absorb the moisture and prevent premature activity.”

We predict that once you realize how easy it is to make your own baking powder on demand, you will probably want to buy your cream of tartar in a slightly larger quantity than offered at the supermarket in those dinky one-ounce containers from McCormick. We love this 2lb container of Earthborn Elements cream of tartar; it’s pure, non-GMO, and a good price for the amount. (It’s the tub of cream of tartar in the picture.) 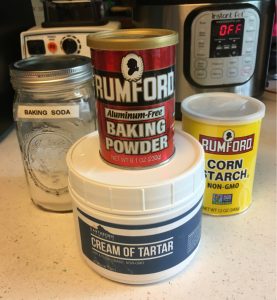 Mix well with a whisk (or, if you don’t have a whisk, with a fork) until fully blended.

We make a larger batch, and store it in a repurposed Clabber Girl baking powder tin. :~) 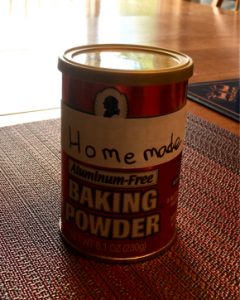 See more recipes in This & That, Quarantine Recipes

Happy vegans who liked this: 836