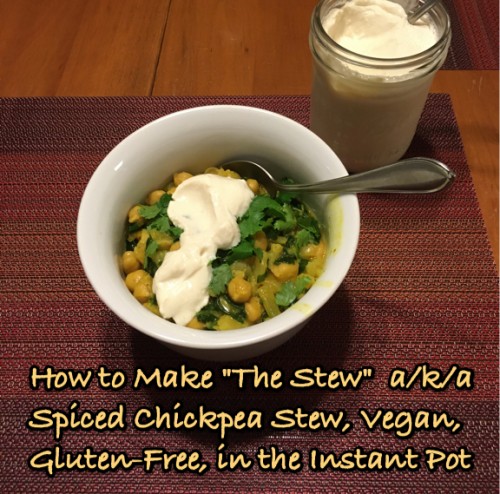 A great deal has been made of Alison Roman’s Spiced Chickpea Stew With Coconut and Turmeric, now known simply as “The Stew” (it’s that good!) or even #TheStew. Here is how to make it vegan, gluten-free, and in the Instant Pot!

Roman’s Spiced Chickpea (a/k/a garbanzo beans) Stew With Coconut and Turmeric originally appeared in the New York Times, and quickly went viral. However, despite being relatively easy to make (by which we mean that a beginner cook could make it if they paid close attention to the recipe, and that an experienced cook could easily make it), it was time intensive and, while vegan options were offered, non-vegan options were as well. Why even bother having to sort through those if you know that you want it vegan? Same with gluten-free.

And then, well, if you want to cook it in the Instant Pot or other digital pressure cooker, you would have to guess, as those directions were not included, despite how wildly popular the Instant Pot is these days. Roman’s stove-top directions require tending to a pot on the stove for at least half an hour, if not more.

Our version is vegan, gluten-free, and is cooked in the Instant Pot which, as you know if you have one, is a “set it and forget it” kind of thing! (If you don’t have an Instant Pot or other digital pressure cooker, you can of course make our recipe using Roman’s instructions for the stove-top, which are at the New York Times link above.)

Where our version differs from Roman’s recipe is the substitution of leaf spinach for Roman’s “swiss chard, kale or collard greens, the stems removed, torn into pieces”. Leaf spinach, especially if you use frozen as we do, removes all of the hassle, while keeping all the deliciousness and contrast of greens, not to mention the nutrition. We also use frozen cauliflower, again making this a faster, easier, but equally delicious version.

It also has nearly half the fat, because we use just one can of coconut milk (Roman uses two, and then has you smash the chickpeas a bit to thicken up the stew – no need to do that with this recipe, unless of course you want to, because there is less fat and liquid to begin with). In fact, we think there is just enough. :~)

How to Make “The Stew” a/k/a Spiced Chickpea Stew, Vegan, Gluten-Free, and in the Instant Pot

We like to assemble all of our ingredients in one place before starting to make a recipe. That way we are sure we have everything. And then putting away each ingredient as we use it assures us that we haven’t forgotten to add anything! 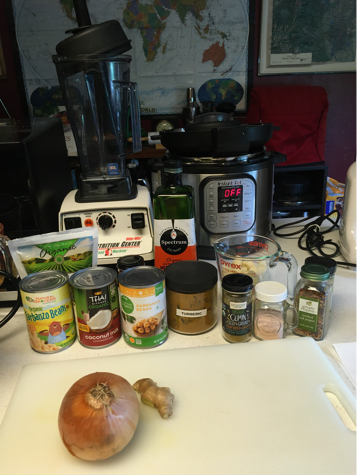 First, take the cauliflower and spinach out of the freezer, measure them out, and set them on the counter so they can thaw a bit.

Now, using the saute function on your Instant Pot, heat the olive oil, and then add the garlic, onion, and ginger. Saute until onions just begin to turn translucent, stirring occasionally, and then add the turmeric, cumin, red pepper flakes, and salt and pepper. Continue sauteing until all the onions are wilted and turning translucent, but are not browning.

Add the cauliflower and let saute for a few more minutes (stir it a couple of times – and by the way your kitchen should be smelling wonderful right about now), and then add the chickpeas. Saute a few more minutes, stir, and then stir in the coconut milk and the veggie broth.

Just Before Adding the Coconut Milk and Broth 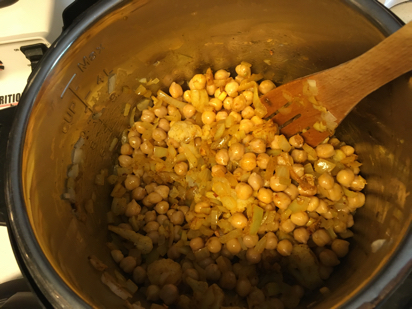 After adding the coconut milk and broth, turn off the saute function, lock on the lid, close the vent, and set to manual pressure for 15 minutes.

Remove the lid, press “Saute” again, and toss in the spinach. Let the stew simmer with the saute function just long enough to heat the the spinach through.

We like to serve this with a dollop of homemade plain vegan yogurt on it, and topped with cilantro from our Aerogarden (Roman suggests garnishing it with mint leaves, which would also be nice, we just prefer cilantro). 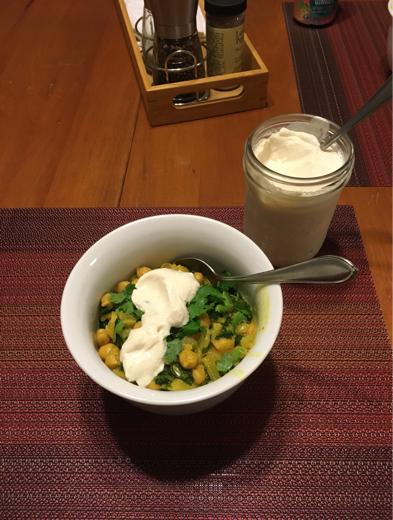