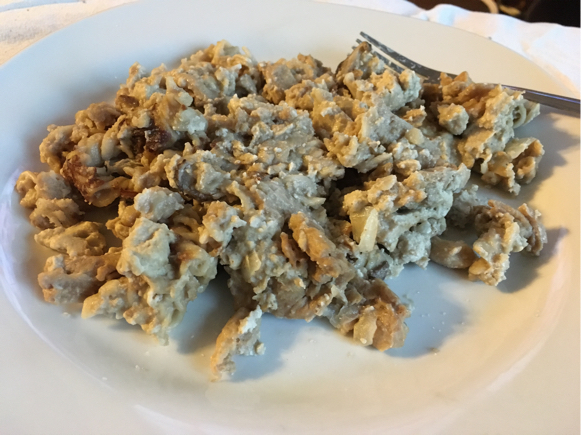 We love recipes that have you just dump stuff into one pot, press a button, and tah dah! That’s how easy this gluten-free, vegan (so dairy free) chicken mushroom casserole is! And it’s deeelish, and high protein to boot! Score!

We’ve been in lockdown for umptysomething weeks, so we’ve been doing quite a bit of experimenting with recipes. This casserole is a result of that. :~)

It does use Butler Soy Curls, which you can get on Amazon here or directly from the Butler website, but you can use any vegan ‘chicken’, really. The soy curls are nice because a) they are shelf stable (you rehydrate them to use them) and b) they have only one ingredient: nonGMO soy.

The directions may seem a bit loosey-goosey, and that’s because this is one of those kind of recipes that you don’t have to follow precisely, and can make your own. For example perhaps instead of frozen mushrooms you want to use frozen peas. Or maybe you want to use both! Go ahead, it’s fine! This is a very forgiving recipe!

Ingredients
2 cups raw (unroasted) cashews
1 quart of any kind of vegan broth that you want.
1/2 package Butler soy curls, or 3-4 cups vegan chicken chunks
1 package frozen mushrooms (can use a different frozen vegetable – peas or corn would be good!)
1/2 onion, thinly sliced
1 package gluten-free vegan pasta (pretty much any size package other than industrial size :~) )
salt and pepper to taste 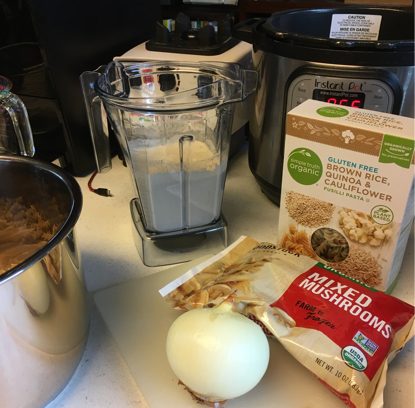 Put the soy curls in a small sauce pan, pour in enough of the broth to cover them, bring to a boil, and turn off the heat. Let sit, rehydrating, for at least 10 minutes. 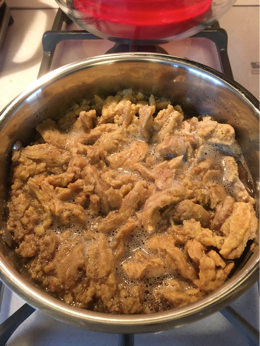 While the soy curls are rehydrating, put the cashews and the rest of the broth in a high speed blender such as a Vitamix. Turn the blender on at low power, and slowly crank it up to high power, blending until you have a smooth, creamy sauce, the consistency of thick gravy. If there isn’t enough liquid (i.e. it’s too thick) then wait until the soy curls are done rehydrating and use some of the rehydration liquid. 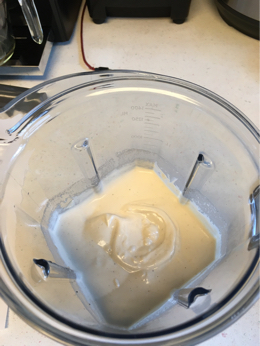 Put a strainer in a bowl, and dump the soy curls into the strainer, and squish as much liquid as you can out of the soy curls, reserving all of the liquid (even if you don’t need it for the cashew cream, you are still going to use it).

We have a great little enamel colander which is perfect for this! 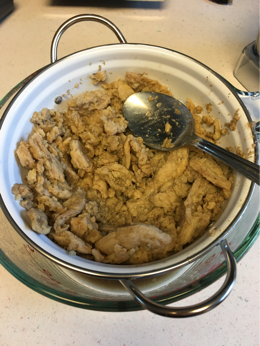 Now you are ready to assemble your casserole!

Dump the pasta into the bottom of your Instant Pot. 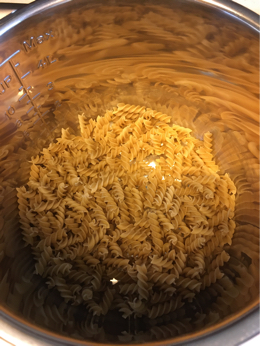 Take whatever liquid is left from the soy curls, and add it to the pot. Now add enough water (or more broth, if you have another container of it) so that the liquid just barely covers the pasta.

Next spread the soy curls out over the pasta.

Next layer the cashew cream over the soy curls. 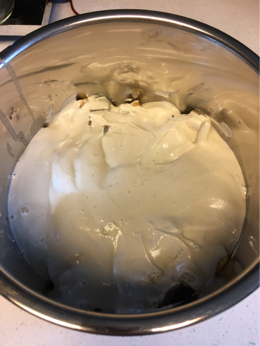 Sprinkle onion over the cashew cream.

Add salt and pepper to taste.

Now put the frozen mushrooms (or whatever frozen vegetables) in a layer on top of everything else.

Do not stir it.

Lock your lid on your Instant Pot, and set to 4 minutes manual.

When it’s done let it NPR (natural pressure release) for 10 to 15 minutes, and then QR (quick release) the rest of the pressure.

Open the lid carefully and stir. 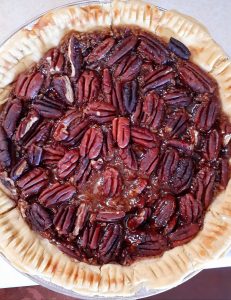 No-Roll Gluten-Free Dairy-Free Vegan Pie Crust Recipe – That’s Right! You Don’t Have to Roll it Out!