Our wonderful chef Leah recently posted her gluten-free, vegan pecan pie, and it includes this amazing gluten-free, dairy-free pie crust recipe (in fact it’s vegan), that you don’t even have to roll out – you just press it into the pie pan! It’s so amazing that we thought it deserved it’s own special post! (Leah’s awesome gluten-free vegan pecan pie recipe is here.)

This is a great crust to use for nearly any single-crust pie, whether sweet or savory! So, for example, you could equally use it for our tofu-based vegan quiche and our tofu-free vegan quiche using Just Egg, as for our gluten-free vegan pumpkin pie!

Now, of course, this won’t do for a double-crust pie, however a lot of traditionally double-crust pies lend themselves to a crumb topping rather than a crust top (including, for example, our gluten-free, dairy-free, vegan apple pie). Here is a quick recipe for a simple crumb topping (don’t worry, the pie crust recipe is down below) ):

Put everything into a food processor and pulse until crumbly. If you don’t have a food processor you can also cut in the Earth Balance and mix it together by taking a table knife in each hand, then cross your hands, putting the tips of the knives touching the opposite sides of the bowl, then drawing your hands back to the uncrossed position, with the knife blades coming very close to each other (but not in contact with each other). Do this as many times as you need to, turning the bowl, until the vegan butter is cut in and it’s all crumbly. This is actually much harder to describe than it is to do, so we found this video for you:

Sprinkle the crumble on top of your filled pie just before you put it in the oven.

Ok, enough about that! Here’s the recipe for the dairy-free, gluten-free, vegan pie crust!

This recipe calls for an all-purpose gluten-free flour, but because you don’t have to roll it out, we’re betting that you could also use a single flour like almond flour or coconut flour. Experiment! (And let us know how it turns out! :~) ) Also please let us know what sorts of pies you make with it!

No-Roll, Gluten-Free, Dairy-Free, Vegan Pie Crust Recipe That You Don’t Have to Roll Out!

Instructions
Stir all of the ingredients together in a large bowl until they form a moist ball (not wet, just moist). Flatten the ball into an ungreased pie pan, smoothing the bottom with your fingertips. Push the edges up over the side of the pan and finish the edges with either the tines of a fork, the tip of a spoon, or your fingers, whatever your preference.

Now fill your pie crust with your yummy sweet or savory filling, and bake it according to the pie recipe. If you aren’t using a pie recipe, a general rule of thumb is to bake it at 350° until the edges of the crust turn golden brown and the filling is set. 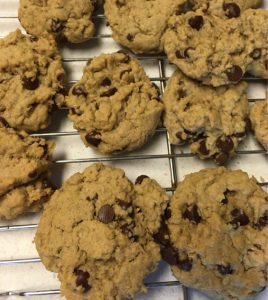