Here’s something crazy: premium granola sells for at least .50 per ounce, and often much more. And that’s not even for organic premium granola. And that’s not even before you get to ‘is it gluten-free’ or ‘is it vegan’? On the other hand, you can get excellent organic rolled oats for as little as .12 an ounce (for example this Bob’s Red Mill organic oats on Amazon), and make your own wonderful granola, and not only know exactly what’s in it, but put exactly what you want in it! Plus, when you make your own you can make it as chunky or not as you want. We like our granola really chunky because we love to snack on it.

Here’s a bit of granola trivia: The term “granola” was based on a similar cereal product called “Granula”. According to Wikipedia, “Granula was invented in Dansville, New York by Dr. James Caleb Jackson at the Jackson Sanitarium in 1863. The Jackson Sanitarium was a prominent health spa that operated into the early 20th century on the hillside overlooking Dansville. It was also known as Our Home on the Hillside; thus the company formed to sell Jackson’s cereal was known as the Our Home Granula Company. Granula was composed of Graham flour and was similar to an oversized form of Grape-Nuts. A similar cereal was developed by John Harvey Kellogg. It too was initially known as Granula, but the name was changed to Granola to avoid legal problems with Jackson.”

Neither of those were the granola that we know, love, and associate with hippies today. That, says Wikipedia, happened when “the food and name were revived in the 1960s, and fruits and nuts were added to it to make it a health food that was popular with the health and nature-oriented hippie movement.”

Whatever you want to call it, here’s our recipe.

4 cups rolled oats (not quick oats, and not steel-cut oats, just regular rolled oats)
2 cups raw nuts (either all one kind, or up to four different kinds; we use almonds, walnuts, cashews, and pecans)
1 teaspoon salt
1/2 to 1 teaspoon cinnamon
1/4 cup nut butter (we like peanut butter but you can use any nut butter)
1/4 cup coconut oil
1/2 cup maple syrup
1 teaspoon vanilla

In a large mixing bowl, combine the oats, nuts, salt and cinnamon. Stir to blend well (we use a whisk for this).

Put the maple syrup, coconut oil, nut butter, and vanilla in a glass measuring cup, and heat in the microwave until the coconut oil and nut butter are melted. Remove from microwave and whisk until smooth.

Pour the liquid over the oat mixture and mix gently but thoroughly until everything is coated with the liquid.

Spread the mixture evenly in the baking pan, and then press down firmly with the back of a large spoon, so it is an even, compacted layer.

NOTE: Do not add the fruit or chocolate chips, those go in after baking your granola.

Bake until golden brown, about 25 minutes. 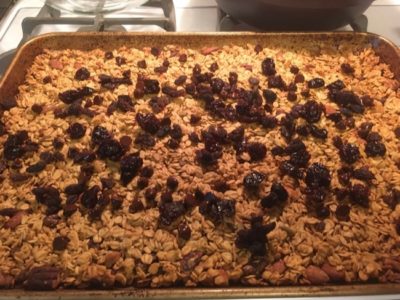 Now let the granola cool completely, undisturbed. This is how you get chunky granola.

Once the granola is completely cool break it into chunks and store in an airtight container. 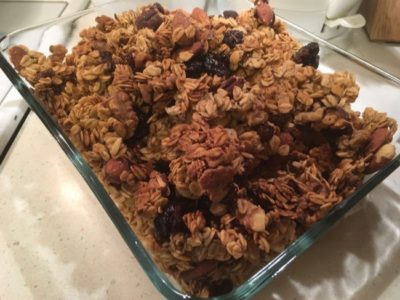 Happy vegans who liked this: 407