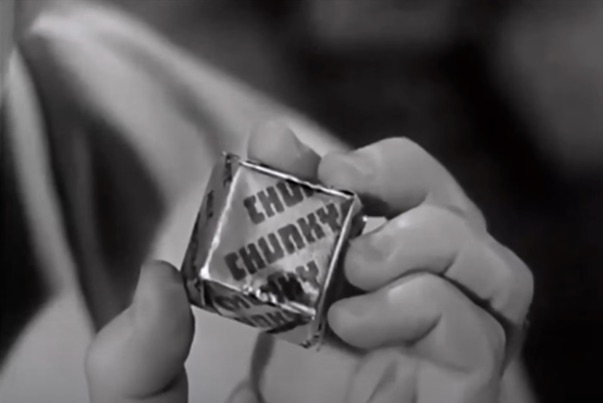 Our copycat dark chocolate Chunky bars are super-easy to make, they are vegan, they are gluten-free, and honestly they are just plain better (and better for you) then actual Chunky bars (especially since Nestle took them over, and reduced the quality of the ingredients, and raised the price). Plus, you can get all of the ingredients at Costco (but of course you don’t have to), and organic (ditto)!

If you are of a certain age, you may remember that the original Chunky bars had cashews and raisins in them (some brazil nuts too); when Nestle took over Chunky in 1984, they got rid of the cashews and brazil nuts, replacing them with peanuts (because: much cheaper), thus relegating Chunky bars to the much more mundane, and numerous, class of “chocolate and peanut” confections. You will note that we use cashews in our recipe; take that, Nestle!

Chunky’s slogan back then was “Chunky, what a chunk of chocolate,” and they ran fun commercials like this one from 1958: Old-timey Chunky bar commercial from 1958 on YouTube

According to the pretty darned awesome site Chocolate Candy Intelligence, a gentleman by the name of Philip Silvershein invented the Chunky candy bar (chunk) in the 1930s. The known history has it that he had contacts at Wrigley and so made a distribution deal with Wrigley. According to the Button Museum, legend has it that the Chunky bar’s unique trapezoidal shape “was arrived upon by Silvershein who, after contemplating a pyramid shaped block of plaster, chopped off the top! The original recipe was simple: chocolate, cashews, raisins and Brazil nuts.” And according to Wayword Radio, Silvershein named the candy “Chunky” after his granddaughter, whose nickname was Chunky because she was such a chubby baby.

By the way, the Button Museum is a really cool site. Curated by the Busy Beaver Button Company, which is run by the brother-sister team of Joel and Christen Carter, it has oodles of “pinback” buttons on display on the site, from political slogans, to advertising (such as the Chunky button), to humorous. Here’s one of our favorites:

The really cool thing about this recipe is how easy it is. You don’t even have to babysit it! You do, however, need to have a set of silicone muffin tin liners (these are the ones we have). (You may be able to use paper ones as well, but we haven’t tried it.) These silicone baking cups are also the ones that we use to make our Easy and Delicious 3-Ingredient Keto Gluten-Free Vegan Fat Bombs and our Super-Easy Golden Turmeric MCT Protein Cups (a/k/a Golden Fat Bombs). You can also use square molds, if you want to be more authentic, but we really like how they come out using the round ones.

Line up your baking cups on a shallow baking tray, and scoop 2 teaspoons of chocolate chips into the bottom of each cup, smoothing them out into an even layer as much as possible. Now put one cashew (broken into pieces) and 3 to 4 raisins into each cup on top of the chocolate chips.

Place the cups, on the pan, into your oven, and walk away. :~) Leave it in there for at least a half-hour, and as much as an hour (depending on your oven, and what the lowest temperature setting is for your oven).

The chocolate will melt, but note that it will keep its shape and it will look as if it hasn’t melted! Trust us, it has.

Remove the pan of cups from the oven and, using the back of a small spoon, smooth out the top layer of chocolate (see? We told you it was melted. :~) )

Place the cups in a covered container and place them in the fridge to harden. Once they are firm, you can store them either at room temperature or in the fridge. 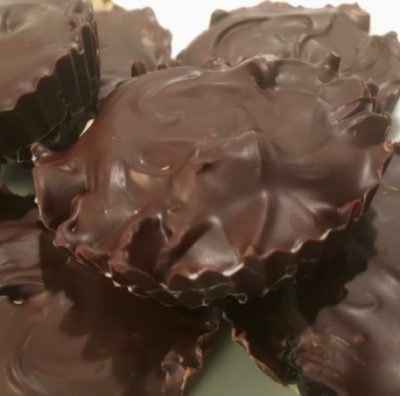 Happy vegans who liked this: 360