Winter is a wonderful time for this nourishing dish. It’s creamy and filling, like mashed potatoes, but much yummier and more nutritious! Brewer’s yeast, cauliflower, and celery root are packed with vitamins, and the flavor is slightly sweet, with a bit of a tang.

You’ll be scooping this mash out of your blender or food processor for little tastes before you can even pour it into a bowl. And it’s so simple and inexpensive to make, with only seven ingredients.

Peel the celery root and either compost the skin or save it for stock. Chop into one-inch chunks and set aside. Mince 2-4 cloves of garlic, and chop the cauliflower head into bite-sized florets. Place these ingredients into a large frying pan with two tablespoons of olive oil. Fry on medium heat setting for approximately ten minutes.

Add 1/2 cup vegetable broth or water and turn down the heat. Cover the pan and simmer for approximately 20-30 minutes until the celery root and cauliflower are tender. Check occasionally to make sure there is enough liquid. Add more if necessary. Remove pan from stovetop and allow its contents to cool for a few minutes.

Pour the mixture into a blender or food processor. Add salt and pepper to taste, nutritional yeast, and a tiny bit more vegetable broth or water. Blend until nice and creamy.

Transfer the contents into a large bowl. Add two tablespoons of olive oil and stir. Garnish with bits of chopped thyme. Eat this concoction warm, and you’ll be in heaven. You can add a bit more olive oil or Earth Balance to the top for additional richness. This mash is also great as a cold dip with gluten-free bread, crackers, carrot sticks, avocado slices, etc. It’s so versatile! Feel free to experiment.

Serves four people. Everyone will rave about this yummy side dish. It keeps well in the refrigerator for 3-4 days and tastes just as great reheated as it did on the first day. You’ll never go back to plain mashed potatoes or look at cauliflower in the same way again. Or celery root, for that matter. We just love this dish, and feel confident that you will, as well. 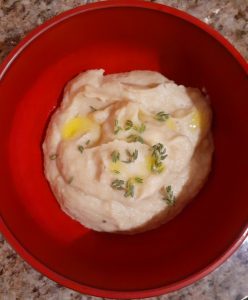 Herb Tofu Scallion Spread is Gluten-Free, Vegan, and Delicious on Crackers or Bread 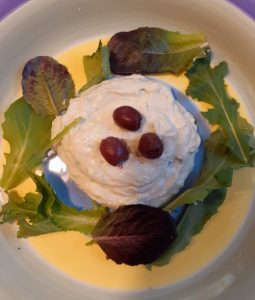 You’ve undoubtedly had the disheartening experience of going to a potluck and encountering a slew of dairy-based dips and spreads. This can be frustrating if you’re doing your best to follow a vegan, gluten-free diet. Don’t despair! Here is a delicious, creamy spread you can make from tofu that tastes just as good as the dairy-based variety! Even your non-vegan friends will love it. They may even beg you for the recipe. The spread is healthy, since it utilizes basil and Italian parsley, herbs that are rich in vitamin C. The tofu adds protein and calcium. Much healthier than your average spread, and so easy to make!

Heat the olive oil in a small frying pan on medium setting. When oil is hot, add chopped garlic and fry for about one minute. Pour in scallions and red pepper and continue frying for about 2-3 more minutes, until the scallions are bright green. Remove from the burner and set aside.

Crumble tofu into a blender or food processor. Add the basil, parsley, sea salt, lemon juice, miso, and water (try less than 1/4 cup of water at first, then add more if mixture is too thick). Pour in the scallion/red pepper/garlic mixture and continue blending until your mixture is creamy and frothy. Scoop mixture out of the blender or food processor and transfer to a medium-sized bowl.

Serve with crackers, wedges of gluten-free bread, and condiments like black olives, capers, salad mix, carrot sticks, zucchini slices, etc. Really, the possibilities are endless. You can make an entire meal out of this tofu spread if you so desire. It’s much heartier than you might imagine.

Serves about 4 people, depending upon whether you transform this spread into a main dish or serve it as an appetizer. You can cover leftovers and store them in your refrigerator for up to three days. You don’t need to tell anyone that it’s made from tofu — unless you feel like it, of course. Your friends will be astonished! You’ll want to make this simple but elegant spread again and again.

This is a variation on our favourite fast and easy dehydrator crackers. It is just as fast and easy, but different enough to deserve its own recipe page.

This recipe calls for maple sugar, but you could just as easily use date sugar or coconut sugar, or even regular vegan sugar. It only calls for a tablespoon of the sugar, so these are not sweet.

Put all of the dry ingredients in a bowl and mix with a whisk until well blended. 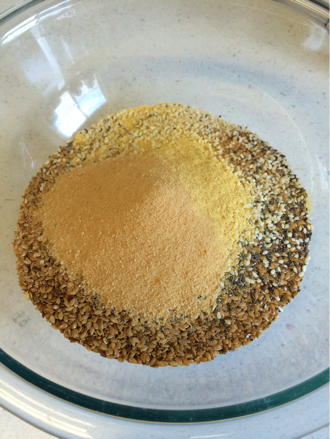 Next, stir in the water, and mix it well. The mixture will seem very soupy, but wait until you see what it does in the next five minutes.

Ladle mixture onto dehydrator trays covered with Teflex sheets or parchment paper (do not use wax paper or aluminum foil).

Quickly spread the mixture as thin as you want it. This recipe makes exactly two full dehydrator trays for an Excalibur dehydrator. 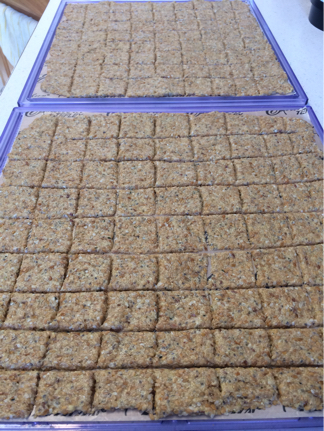 After spreading the mixture on your dehydrator trays, let it stand 5 more minutes. This is important, so that it firms up just a bit more, making it easier to score the crackers, so that they will break apart nicely when they are done.

Put in dehydrator at 115 degrees, and dehydrate until the crackers are completely dry. You really can’t over-dehydrate them, and we dehydrate them for at least 24 hours.

When they are done, break the crackers apart, and store in an air-tight container.

These are truly among the best raw crackers we’ve had. They have a fantastic texture, are incredible for you, and are so easy to make! 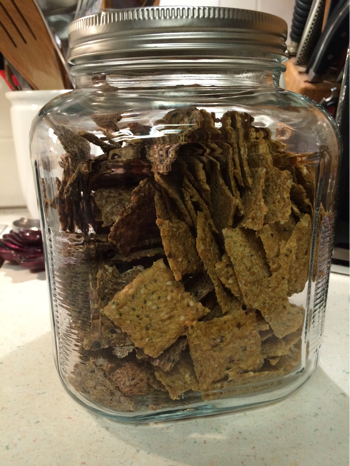 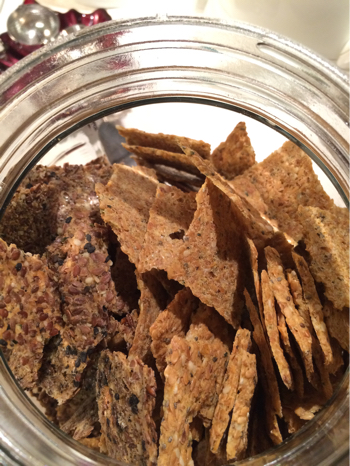 The Best, Fast, Easy and Only Raw Flaxseed Cracker Recipe You Will Ever Need

That is because in addition to the flaxseeds, you can throw in nearly any other seeds you like (and it will still be just as easy!), which is why we say that we should call it a recipe for “3 Seed Flax Crackers” or even “4 Seed Flax Crackers”. We like adding sesame seeds and hemp seeds, but you could also throw in sunflowers seeds, chia seeds, pumpkin seeds…you get the idea.

This recipe can be made savory by adding any sort of seasoning that you like, but we prefer it just as it is, because as it is you can top it with anything you like, be it savory (hummus, guacamole, etc.) or sweet (peanut butter, almond butter, etc.).

So here it is.

The Easiest, Fastest, Best and Only Raw Flaxseed Cracker Recipe You Will Ever Need

Mix the flaxseed, flax meal, other seeds, sugar, and salt in a bowl with a whisk until well mixed. 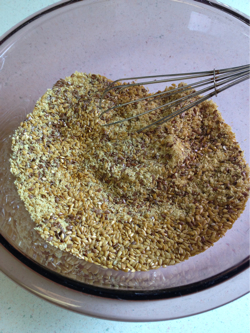 Stir in the water, and mix well. You will think that the mixture is too soupy, but wait.

. If you don’t have Teflex sheets you can use parchment paper – but do not use waxed paper! You have been warned! 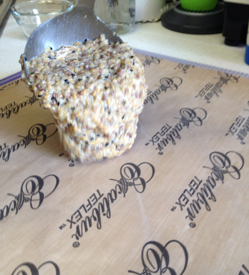 Quickly spread the mixture as thin as you want it – generally the thinner the better, to a point. This recipe made exactly two full dehydrator trays for an Excalibur dehydrator 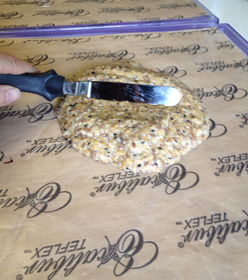 Score the crackers before putting in the dehydrator; this will make it much easier to break the crackers apart after they are done. By letting the mixture stand for that second 5 minutes, once it is spread on the trays, it thickens up just enough more to allow you to effectively score it. 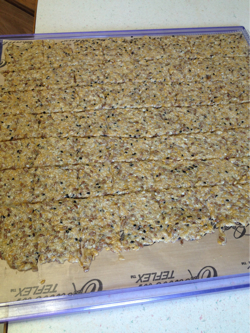 Put in dehydrator at 115 degrees, and dehydrate until the crackers are completely dry. You really can’t over-dehydrate them, and we dehydrate them for at least 24 hours.

When they are done, break the crackers apart, and store in moisture-proof container.

These are honestly the best flaxseed crackers we’ve ever had. They aren’t at all tough, but they also aren’t so delicate that they break apart. And the flavour and texture are wonderful – not at all too flaxy.

Let us know what additions you have made to this recipe! 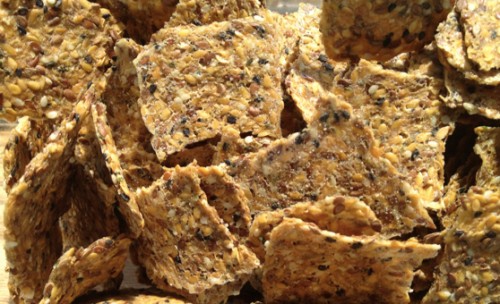