Many, many years ago I lived in an ashram, and along with a life-long love of Indian food and culture, not to mention Hindu religion and philosophy, it gave me Brahmastra juice (pronounced bramastra juice).

Brahmastra juice goes by many names, including alternate spellings such as ‘bramastra juice’ and ‘bramastrah juice’, as well as various names such as ‘Indian cold killer’ and ‘Ayurvedic cold remedy’. However, at its heart there is the basic Brahmastra juice recipe, which uses three staple ingredients: lemons, fresh ginger, and cayenne pepper (red pepper).

To those basic ingredients you can add a sweetener, if you like or need, such as maple syrup or agave. Some people add turmeric, and even cinnamon.

The lemons, of course, provide vitamin C, well-known to be useful in the treatment and prevention of colds. As Healthline points out, “Lemons contain a high amount of vitamin C, soluble fiber, and plant compounds that give them a number of health benefits,” and, as Medical News Today points out, “Lemons are an excellent source of vitamin C and flavonoids, which are antioxidants. Antioxidants help remove free radicals that can damage cells from the body. These nutrients can help prevent diseases and boost health and wellbeing.” And not only that: lemon juice also has antibacterial properties, and lemon (and other citrus juice) contains as many as 15 different antiviral compounds!

Ginger is an age-old cold remedy, and for good reason. Gingerol and shogaol are two of the primary compounds in ginger that give it its extraordinary cold-fighting properties. In fact, gingerol not only helps a sore throat, but has been proven to kill the rhinovirus and other human respiratory viruses!

The cayenne serves to thin your mucus and clear your sinuses (so you can either cough it up or blow it out more readily – think of how your nose runs when you eat something that is too spicy-hot) . In other words, it helps to loosen phlegm and mucus in your lungs and nasal passages so you can get rid of it.

Now that you understand why these three ingredients actually help from a scientific standpoint, here is the recipe!

This recipe is a guideline, adjust it according to your own needs and tastes. That said, use as much cayenne as you can stand. In fact, ideally it should make you break out in a sweat (but if you can’t stand that much, it’s ok!) If it ends up being too strong, dilute it with hot water.

5 cups water
2 lemons, cut into small pieces including the skin
4 inches fresh of fresh ginger root, sliced (peeled or not according to your taste)
1 to 2 teaspoons of cayenne pepper, the more you can stand the better

Place the water, lemon, and ginger in a pan and bring to a boil. Simmer for one to one-and-a-half hours. Add cayenne pepper and continue to simmer for another half hour.

Remove from heat and drink warm, adding sweetener such as maple syrup or agave if desired.

Drink warm, adding sweetener such as maple syrup or agave if desired.

To Strain or Not to Strain?

Most people will strain this before drinking, but it certainly won’t hurt you to eat the chunks of lemon and ginger if you want to – in fact they are beneficial!

Brahmastra Juice in the Instan Pot 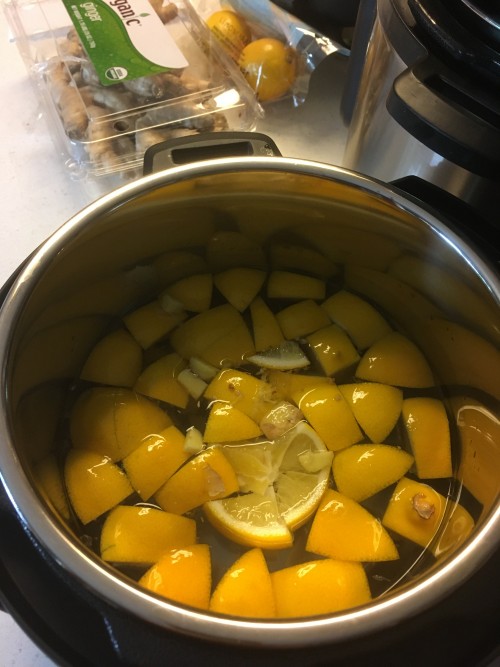