As I mentioned in both the posts for the easy coconut ginger lime soup recipe and the cold killer Brahmastra juice recipe, we’ve been sick here. So we’ve been existing on soups, and they have to be easy, because neither one of us really has the will, let alone the strength, to actually cook. And one day we were low on ingredients, and I thought “Hrrmmm..what can I make with what we have here?” (Because there was no way that either of us were in condition to drive to the store.) “What we had here” was broth, and ramen. And an Instant Pot. And so this recipe was born, truly out of necessity.

And it was so delicious that we wanted it again and again, and eventually we ran out of broth! So I looked around again, and found an old package of vegan bullion. I was dubious, but desperate, and guess what! It was just as delicious

I actually feel a bit guilty even calling this a “recipe”, because it’s so simple, and was so obvious to me. But I posted it over in our vegan Instant Pot recipes group on Facebook (now with over 26,000 members from all around the world!), and on our Vegan Costco Facebook group (because the ramen I used is from Costco), and the response was so enthusiastic that I figured that I had better write it up!

We get our ramen at Costco and it’s awesome. It’s the organic millet and brown rice ramen from Lotus foods, and it’s gluten-free and vegan and delicious! And you get 12 ramen noodle bricks for just $7.99! Thrive Market sells a 4-pack for $6.15! (Well, $4.79 if you get it on sale there) and on Amazon the same 12-pack sells for $17.70! The ingredients in the Lotus Foods ramen are (and only are):

So you can see why we like it, and why we get it at Costco! But that said, I’m sure that any cake of dried ramen noodles will do!

Anyways, here’s our recipe (if you can call it that :~) ) for this delicious ramen soup in the Instant Pot (I figure that you know how to cook ramen on the stove top, it’s figuring out the instructions for the Instant Pot that was tricky).

If you are using a bullion cube, now is the time to put it in the Instant Pot, next to (not under and not on top of) the ramen.

Lock the lid on your Instant Pot, close the pressure valve, and set to 3 minutes manual pressure.

When the three minutes is up do a quick release (QR). You do not want to natural release the pressure, as the ramen will get nasty.

Once the pressure is released, open your Instant Pot, and with a fork in each hand, tease the ramen apart. Don’t freak out because when you first open the pot it will look like you have just made yourself a solid cake of ramen floating in broth; I promise you that the ramen will come apart easily with the ‘teasing-apart-with-a-fork-in-each-hand’ method. 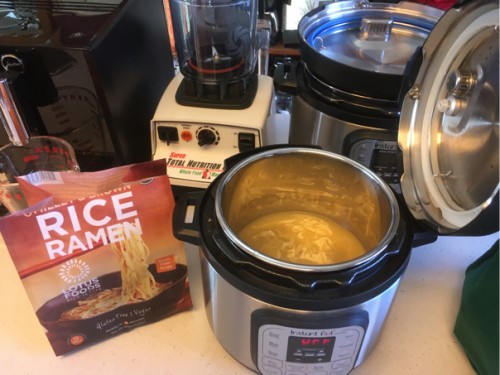