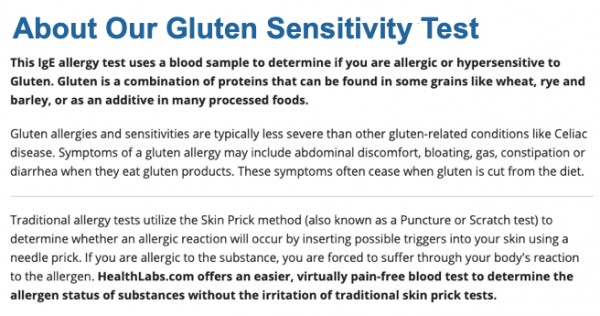 Wondering whether you are sensitive or even intolerant to gluten? Lab tests are the best way to find out, as they are the only way to actually detect your body’s reaction to gluten on a micro level. After all, you want to know what’s going on inside your body, and you want the most accurate answers possible. And you deserve to know what is happening in your body without having to guess, and without having to worry about inaccurate information, or missing an important clue.

We believe that it is an individual’s right to know about what is going on in their body, and that we shouldn’t need permission to have access to the tests that can give us that information. That’s why we’ve partnered with HealthLabs to offer their gluten sensitivity test, which you can sign up for online with no doctor appointment or referral needed and no insurance required, and which costs only $29!

Some symptoms of being sensitive to gluten are obvious, but others are not so obvious, and are often attributed to other things. For example, if you’ve been feeling tired, bloated or irritable for a while and can’t figure out why, it could be because of a gluten sensitivity. The HealthLabs test will help determine if gluten is the culprit behind your symptoms! Gluten is found not only in wheat products such as breads, pastas and cereals, but also in rye, barley, and oat products.

And for those who are gluten-sensitive, but not necessarily celiac, gluten can trigger all sorts of seemingly unrelated things. Anne, who founded the Happy Gluten-Free Vegan, has a very rare auto-immune condition (morphea), which her doctor believes was triggered at least in part by a previously undiscovered, but serious, sensitivity to gluten.

If any of this sounds like you, order the test today to find out if gluten is making your life miserable! It only takes a few minutes to order the test, and you’ll get accurate results in days (sometimes even hours!), not weeks.

Just go to the HealthLabs site

and select the gluten test, or one of the more comprehensive tests that includes gluten or wheat. After signing up, you will be sent the order for the lab test (HealthLabs has their own doctors which will write the order, which is why you don’t have to go to a doctor for a referral!), which you can take to any certified lab near you, such as Quest, LabCorp, and other certified labs, and they will take care of the rest! You will receive your results via the secure HealthLabs portal, often within 24 to 48 hours!

After doing a lot of research, the Happy Gluten-Free Vegan settled on HealthLabs as their gluten testing partner because they have outstanding reviews from hundreds of satisfied customers on independent, 3rd-party review services (for example Testing.com, and ShopperApproved.com), and because they are easy for customers to work with.

Also, in addition to the gluten sensitivity and other food sensitivity tests, they offer a wide range of other tests related to optimal health and wellness, including tests designed specifically for vegans

, and tests to measure your vitamin and nutrient levels

, all without requiring an appointment for an order from a doctor, and at very reasonable prices.

So instead of guessing whether you are gluten-intolerant, take the $29 blood test to find out for certain. Go to HealthLabs now to get started.

FOUND! Better Replacement Travel Lids for the Ninja Foodi Smoothie Blender!
Fabulous Bircher Muesli Recipe - the Original Healthy Overnight Oats Recipe That Doesn't Have to be ...
The Best Vegan Chili Dogs Recipe - Just in Time for the 4th of July!
The Top Recipe Websites for Gluten-Free Vegan Recipes (That You've Never Heard Of)
Easy Peasy Gluten-Free Vegan Coconut Bacon
It's So Easy to Make Your Own Homemade Tofu That You Won't Even Believe It!
Homemade Dual Ingredient Baking Powder Recipe - Gluten-Free, Vegan, and Aluminum-Free!
The Best Homemade Gluten-Free All Purpose Flour Mix Recipe! Easy to Make, Clean Ingredients and No P...

Happy vegans who liked this: 171