But first, before anything else, it’s called the “Soup Nazi’s” soup based on a Seinfeld episode, which in turn was based on an actual soup restaurant in New York City, Soup Kitchen International (you can read more about that here). The point is, we didn’t name it.

The original recipe, which we’ve made many times in the past, calls for a total of 22 cups of liquid (yes, you read that right), and then you simmer it for 4 hours to reduce it. So, as you can imagine, this made adapting the recipe for the Instant Pot a bit challenging, as of course when you pressure cook something, there is virtually no reduction in the liquid, but just cutting the liquid in half still wouldn’t give it that melding of flavors that you get with a long simmer time.

After some experimenting, the resulting Soup Nazi mulligatawny in the Instant Pot was declared “incredible” by all of our taste testers. :~) So here it is.

The Soup Nazi’s Mulligatawny Soup in the Instant Pot! Vegan and Gluten-Free!

All the Dry Ingredients in the Instant Pot 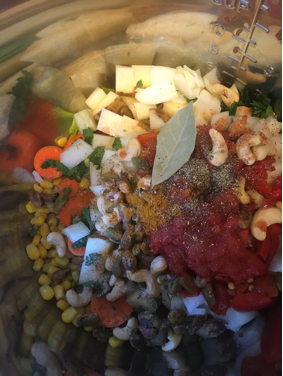 Combine all ingredients in Instant Pot. Press the ‘Soup’ button, making sure to use the low pressure option, and set time to 120 (2 hours) using the ‘More’ button.

When it is done pressure cooking, let the pressure release naturally.

Remove the lid from the Instant Pot, and press the ‘Saute’ button, and then ‘Less’. This will bring the soup to a simmer.

Simmer on ‘Saute’ for at least an hour, with the lid off – you can let it go longer if you want a deeper, richer broth flavor.

NOTE: Even though the recipe does not call for it, next time we are going to try browning the eggplant a bit (using the Saute function) first.

If instead you want to make the original, stove-top recipe, double everything above, then add two more cups of water, bring to a boil, and simmer for 4 hours.

Unfortunately, we neglected to take a picture of the finished soup, so
instead here is a still from the Seinfeld Soup Nazi episode. 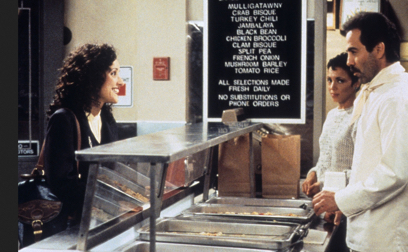