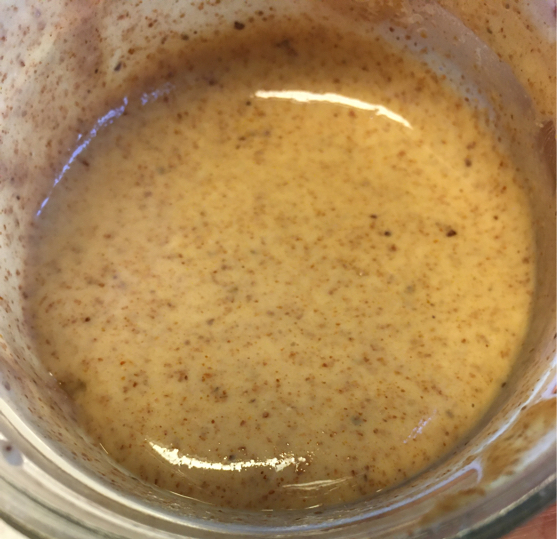 Almond butter is a staple at Chez Casa. It’s one of the most versatile ingredients that you can have on your shelf (not to mention being tasty as all get out on crackers or, hey, from a spoon), and yet many people don’t keep it around, for a few reasons.

For one thing, it can be pretty pricey. Ever notice how with some things, the fewer ingredients they contain, the more expensive they are? And that’s especially true if those few ingredients are organic. Nut butters are definitely one of those things. A jar of really high end organic almond butter that has, let’s face it, only one ingredient (almonds), can run you upwards of twenty dollars.

For another thing, really good almond butter, especially those high end ones, tend to get too thick, and gritty, by the time you get down towards the end of the jar. In part that’s because while it’s a great staple, it takes a while to go through a full jar of almond butter. And that’s in part because, generally speaking, good almond butter is only sold in 16 ounce jars (of course there are exceptions, but that’s generally the case).

So, to recap, store bought almond butter is expensive, and you may end up wasting some of that precious goo because you are stuck buying more than you can really use before it starts to deteriorate.

But what if you could have just the right amount of almond butter on hand, and whenever you need it?

You can! Because it turns out that if you have a food processor (or a good high speed blender, but we find that our food processor works better), you can make the best almond butter that you have ever had, whenever you need it. All you need is that food processor and some raw (not roasted, and not blanched) almonds.

By making a fresh just-the-right-amount batch of almond butter as you need it, you will never again end up wasting almond butter. Plus, it tastes incredible!

It’s also way less expensive, and not only because you won’t be wasting any. A bag of organic almonds at Costo (with over a pound and a half of almonds) costs about $17.00. 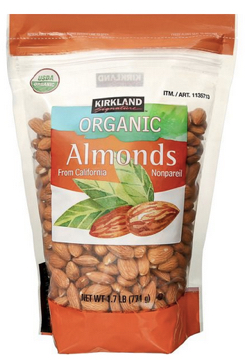 This really gets to the heart of why homemade almond butter is so darned good, and so easy to make. It’s pure almond, and all of the almond, so the amount you put in is the amount you get out.

Ready? Here’s how to do it.

You will need a good food processor, fitted with the ‘S’ blade, or a strong high-speed blender like a Vitamix. We make this in our food processor.

raw (not roasted and not blanched) almonds, in an amount equal to how much almond butter you want to end up with.

Put the almonds in your food processor with the ‘S’ blade.

Turn your food processor on.

Now go read a book, coming back every so often to scrape down the sides of the food processor.

You see, here is where most people end up thinking that they did something wrong, because it didn’t turn out like they expected. Here’s why: you have to process the nuts for what seems like forever. Actually it’s only a half hour or so, but that is still an amount of time outside of most people’s experience for a recipe.

When you put the almonds in the food processor and turn it on, the almonds will go through several stages:

People get to the slightly-less-grainy-than-sand stage and think that it must be as good as it gets, and that it couldn’t possibly need more time processing (it does) and they give up (don’t do that). Or they decide to add a little bit of oil, thinking that will make it less thick, and smoother (don’t do that either).

The thing is that the friction from the processing isn’t just chopping the almonds into smaller and smaller bits – it’s also warming the almonds, and that warming, along with the chopping, causes the almonds to release their oil. This starts happening towards the end of the slightly-less-grainy-than-sand stage, and is what transforms it, suddenly, to the smooth like butter stage.

Getting the almond butter to where we want it (smooth and silky) takes us exactly 35 minutes of processing. For you it may take a few minutes less or a few minutes more, but it will happen if you give it enough time.

When it’s done, pour it into your container while it’s warm (once it cools it will be thicker).

We guarantee that this will be the most delicious, fresh-tasting almond butter you have ever had. Once you experience how flavorful it is, how easy it is to make, how convenient it is, and how much less expensive it is, you are unlikely to go back to store-bought almond butter ever again! It also makes a great gift!

Use this almond butter just as is, slathered on toast, in a sandwich, or on crackers, or use it in recipes such as our 5-minute Vegan Caramel recipe and our plant-based queso copycat recipe. 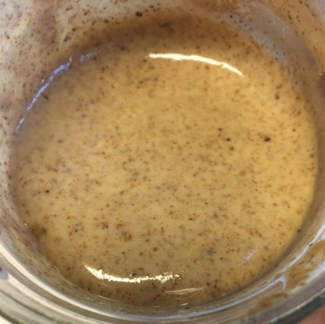