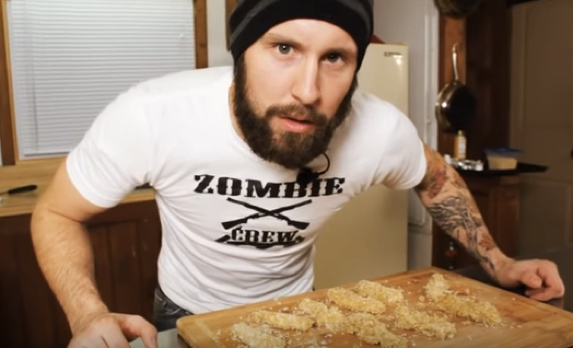 Today’s recipe inspiration comes from one of my favorite vegan chefs, the Vegan Zombie. If you are not familiar with the Vegan Zombie, you must check out his website and become a fan of his page on Facebook! He has some fantastic recipes, and serves them up with a heavy dose of entertainment, and a dash of zombie battle preparedness.

He introduced a great recipe for vegan cheeze stix, using Daiya vegan cheese. I instantly tried it, but modified a bit to be gluten free.

Adapted from the Vegan Zombie

Start by melting Daiya cheese and 2 tablespoons of your favorite milk alternative in a double-boiler. I like to use unflavored almond milk, but the Vegan Zombie uses soy. When it is nearly melted, add 1-2 teaspoos of garlic and oregano to the cheese mixture for added flavor. When it starts to form into one ball, pour it into a loaf pan and spread it as evenly as possible. Let it cool for 10 minutes, and then put in the refrigerator for about an hour.

While the cheese is in the fridge, place breadcrumbs (or cereal mix) in a bowl and add the garlic powder and oregano, stirring until thoroughly mixed. Set aside. Place remaining milk-alternative and gluten free flour in separate bowls.

Heat about an inch of oil in a saucepan until it is hot enough that it sizzles when you drop a few bread crumbs in there. Once it is at that point, place a few of the cheese stix in the oil with a spatula or slotted spoon. The Vegan Zombie recommends frying no more than 3 stix at a time. Fry until the stix turn a golden-brown color, no more than a few minutes. Remove with a pair of tongs and set on a plate covered with a paper towel. Let cool, and then serve with marinara sauce, or vegan ranch dressing.

Here is the recipe video, straight from the Vegan Zombie.

FOUND! Better Replacement Travel Lids for the Ninja Foodi Smoothie Blender!
Fabulous Bircher Muesli Recipe - the Original Healthy Overnight Oats Recipe That Doesn't Have to be ...
The Best Vegan Chili Dogs Recipe - Just in Time for the 4th of July!
The Top Recipe Websites for Gluten-Free Vegan Recipes (That You've Never Heard Of)
Easy Peasy Gluten-Free Vegan Coconut Bacon
Get Tested for Gluten Sensitivity through Our Partnership with HealthLabs
It's So Easy to Make Your Own Homemade Tofu That You Won't Even Believe It!
Homemade Dual Ingredient Baking Powder Recipe - Gluten-Free, Vegan, and Aluminum-Free!

Happy vegans who liked this: 149