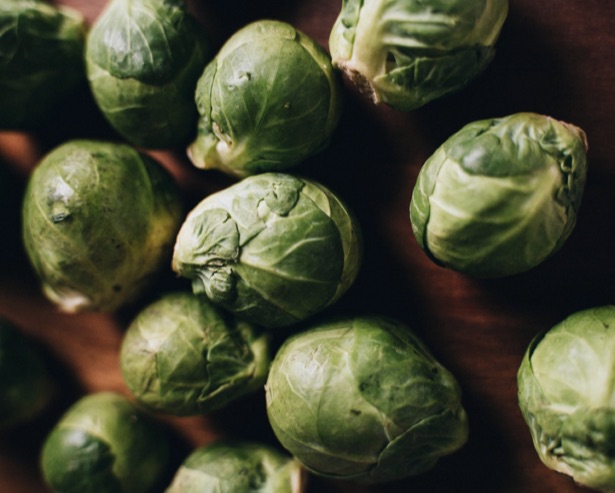 This dish has become quite popular, making the rounds on Pinterest, and with good reason: it is unbelievably delicious. The Brussels sprouts are roasted to a crispy perfection, and the sweet balsamic is perfectly rounded out by the salty parmesan and bacon. Of course, unlike the majority of the versions making the rounds, our version is vegan and gluten-free!

And Brussels sprouts, being in the Brassica family, are a powerhouse of nutrients! For example, they have more than 100% of the recommended daily amount of vitamin C (in fact one cup of Brussels sprouts has 124% of the RDA of vitamin C)! And, in case you were wondering, yes, Brussels sprouts do get their name from Brussels, Belgium, where they were first widely cultivated (back in the 13th century, although they appeared on the botanical scene, in northern Europe, as far back as the 5th century).

Let’s talk about vegan bacon bits for a minute: did you know that most bacon bits that you buy at the supermarket are actually vegan? (Unintentionally vegan, but vegan nonetheless.) That’s because most of them are actually soy bits, flavored and colored to look and taste somewhat like bacon. However, for this recipe we use one of the brands of vegan bacon bits that are made with coconut, they just hold up much better and, we think, taste better. A brand that we like, and which you can order on Amazon, is the Phony Baloney brand coconut-based bacon bits, but you can find others out there now too.

While our vegan and gluten-free bacon and balsamic Brussels sprouts with parmesan cheese is typically served as a side dish, it’s easy to make an entire meal of it, it’s that good!

1 1/2 pounds Brussels sprouts, trimmed and cut in half
1/4 cup olive oil
2 Tablespoons (or more) vegan and gluten-free bacon. We like the Phony Baloney brand of coconut bacon
1 tablespoon syrupy balsamic vinegar such as Fattoria Estense Gold Label
2 Tablespoons vegan parmesan, we really love the Follow Your Heart shredded vegan parmesan, which we also use for our Copycat Old Spaghetti Factory Spaghetti with Mizithra Cheese and Browned Butter recipe, plus more for sprinkling on top
Salt and pepper (ideally freshly ground) to taste

Preheat the oven to 400 degrees.

On a baking sheet (lined with parchment, if you like), toss the Brussels sprouts with the olive oil, salt and pepper. Then arrange them in a single layer and roast for 20 to 30 minutes, tossing halfway through. You’ll know they’re ready when they’re browned and crispy.

Remove from the oven, put into your serving dish, and toss with the balsamic vinegar. Then sprinkle the bacon bits onto the Brussels sprouts, and toss again. Add the two tablespoons of vegan parmesan and toss again.

Serve topped with a bit more of the parmesan.

While you can store any leftovers in the fridge, unlike Klingon revenge, this dish is best served warm and right out of the oven. 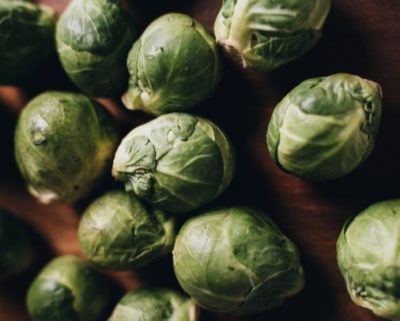 See more recipes in Side Dishes

Happy vegans who liked this: 734