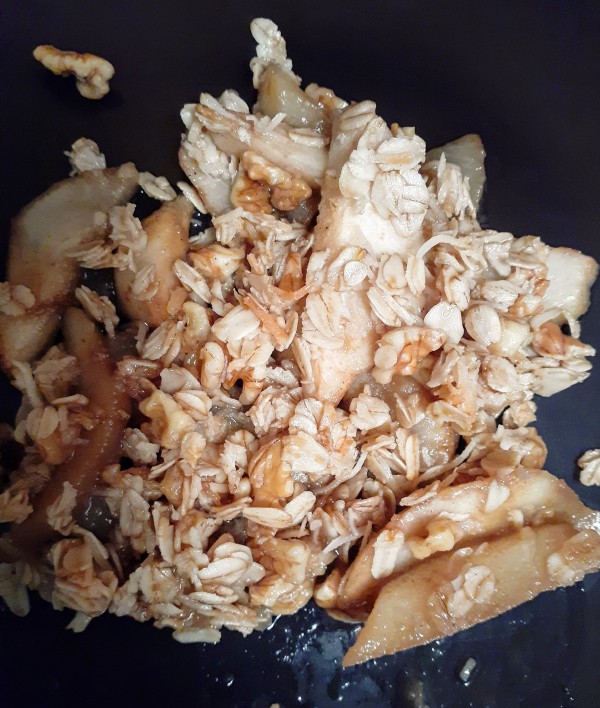 A relative gave us a gift of holiday pears, and we immediately knew what we had to do with them — make vegan, gluten-free pear crisp! This delectable dessert is easy to prepare, surprisingly protein-rich, and so delicious that you’ll want to eat all of it at once! But you’ll end up with a lot, so please share.

You can eat this pear crisp all by itself — it’s amazing that way — or with vegan ice cream or vegan whipping cream. Maybe both? It’s December, time for a bit of indulgence. You can always turn over a new leaf in January. Or not.

Spray a 9X13 baking pan with coconut spray, or slather on a bit of vegan butter or margarine. Preheat your oven to 375 degrees.

Toss the sliced pears around in a medium-sized mixing bowl with the melted butter or margarine, 1/4 teaspoon cinnamon, and coconut sugar. Pour the mixture into the baking dish and spread it evenly.

In the same bowl, add the oats, shredded coconut, optional flour, walnuts, melted coconut oil, maple or agave syrup, and 1/4 teaspoon cinnamon. Stir the contents thoroughly and then spread your mixture across the top of the pears.

Pop your concoction into the oven and bake at 375 degrees for about half an hour. You’ll love the aroma that will fill your kitchen with anticipatory yumminess. You’ll know your pear crisp is done when the top mixture turns brown and bubbly. Yum!

Allow your pear crisp to cool, but just slightly. As mentioned above, it’s great plain as well as with vegan ice cream and/or whipping cream. Serves 4-6, but only if you’re willing to share. You might want to cover it and place it in your refrigerator for later, instead. It should keep up to four days if it’s in a secure container. But of course it won’t last nearly that long.

We might just need to go to the store and buy some more pears, now that the ones we received as a present are gone. We want more pear crisp! This is one of the simplest and best desserts we’ve ever made. We think you’ll agree. 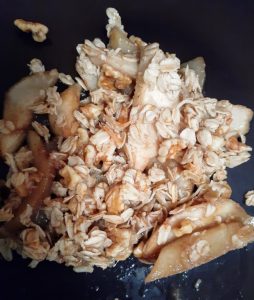 Happy vegans who liked this: 305