According to NewEngland.com, Indian Pudding evolved from hasty pudding, the recipe for which early colonial settlers brought with them. But because the wheat flour with which hasty pudding is made was scarce, they started using cornmeal, which they called Indian flour, and which was plentiful as it was a Native American staple.

Here is a tale recounted in our well-loved, well-worn copy of Yankee magazine’s Favorite New England Recipes, alongside the Indian Pudding recipe:

As in the 1800’s our new country became more and more prosperous, it attracted certain groups of wanderers who brought with them an atmosphere of mystery, a flair for colorful clothing, and a sorcerer’s skill in extracting money from the pockets of the yokels.

These were the gypsies following a path that had started somewhere in northern India and that led them to the farm of the mother of Minnie Smith of West Franklin, New Hampshire. Among their gifts to her were a recipe and a story.

“When I was a small girl, my mother consented to let a band of gypsies pitch their tents on the lower part of her land.

Toward morning a young gypsy came to our door. He begged Mother to let him bring his young wife to our barn, as she was already in labor, and their tents leaked. My mother told him to bring his wife to the house.

The gypsy girl was tucked up in Mother’s bed, warm and comfortable, and tenderly cared for. Mother was obliged to act as both midwife and doctor. When daylight came, there was one more gypsy to join the band.

The gypsies were so grateful to Mother for her kindness that they tried to do all kinds of helpful things. One of them brought her a dish of their wonderful Indian pudding, made over their campfire. When they asked her what else they could do for her, she said that if they would give her the pudding recipe, that was all she could ask. So, years ago, she wrote down the rules given her by a grateful gypsy.” 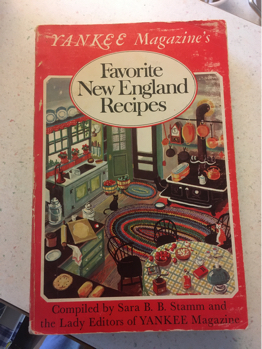 As you can see, the Indian pudding recipe given to the narrator’s mother by the gypsies is decidedly not vegan. So here is the recipe for vegan Indian Pudding, which also just happens to be gluten-free.

Heat the milk and molasses in a medium saucepan until it just starts to boil, and then whisk in the cornmeal and the rest of the ingredients. Simmer while whisking until the mixture thickens to the point that it is like frosting (that’s how we judge it – could I frost a cake with it if I wanted to?)

Pour into a greased casserole dish (solid coconut oil is good for this) and bake at 300° for about an hour or so until done (the edges will be brown, the center may or may not be firm at this point – in part it depends on how you like it). 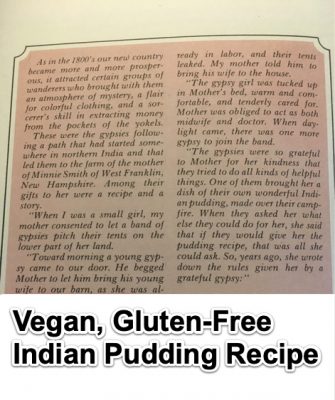 Happy vegans who liked this: 973