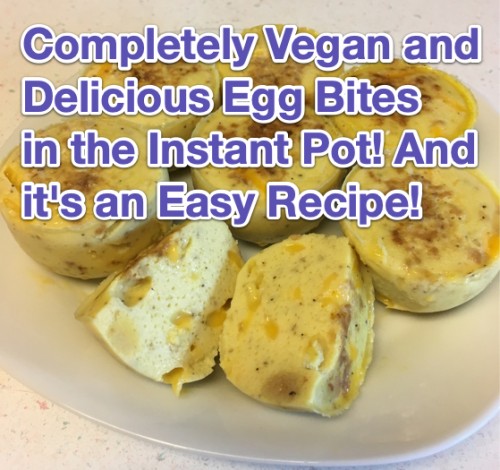 We had just ordered these silicone egg bite molds which are specifically made for the Instant Pot. We happened to order the 2-pack, because we figured we’d use one for savory things, like the egg bites, and one for sweet things (like maybe little steamed puddings or cakes).

The Silicone IP Egg Bite Molds I Use – Isn’t the Sloth So Cute?

Now, these egg bite molds happen to also come with two different lids: a floppy, silicone one for cooking, and a hard plastic one for storage. This will become relevant to the recipe below, although you do not have to have a lid for this recipe, because you can use foil.

Note that these egg bite molds fit in the 6 quart Instant Pot. They would also fit in the 8 quart version, but not the 3 quart mini.

Now, the other thing you have to have for this recipe is a bottle of Just brand’s Just Egg. Yes, basically we are apparently the first person to experiment to see whether Just Egg works in the IP for egg bites (or at least we couldn’t find the answer to this burning question anywhere on the Internet when we were looking for it in August of 2019).

You can buy Just Egg in most health food stores now, including Whole Foods. You can also order Just Egg through Amazon here. Here is what it looks like – it is in the refrigerated section: 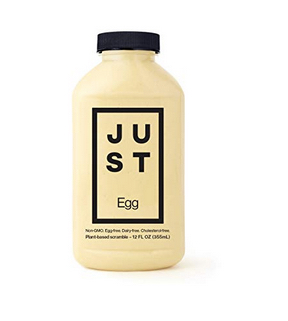 We get why it is called Just Egg, but we also feel it’s a bit unfortunate, as it is easy to confuse it with a bottle of, well, just eggs. That’s actually what happened when one of us saw it for the first time; fortunately we were clued in and so grabbed the bottle, screaming “Ohmygod! They’ve come out with a vegan egg substitute!!” “Wait,” he said, “is that just a bottle of eggs?” “No!! It’s vegan eggs from the Just Mayo people!”

Anyways, we’re betting that we’re not the only ones to have had that conversation.

But we digress. On to the recipe!

Here are the ingredients and items you will need to have on hand for the version of these vegan egg bites that I made – the only two that are actually imperative are:

One bottle of Just Egg
Neutral-flavored cooking spray or oil

The rest are all up to what you want to have in your egg bites, but here’s what I used: 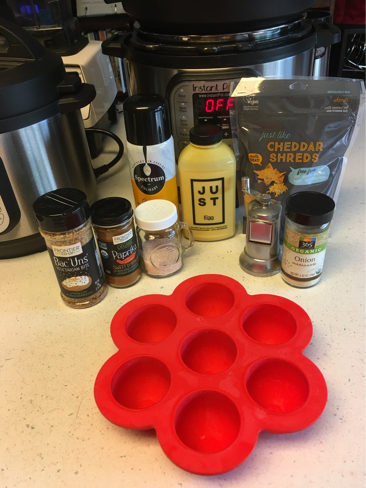 Prepare your egg bite molds by spraying or wiping each compartment with a very thin layer of cooking spray or oil.

Open the bottle of Just Egg.

Spoon all of the spices right into the bottle. Really. 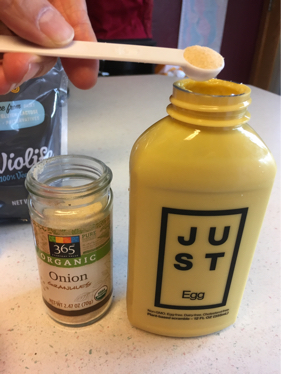 Put the cap back on the Just Egg bottle and shake it to mix well. 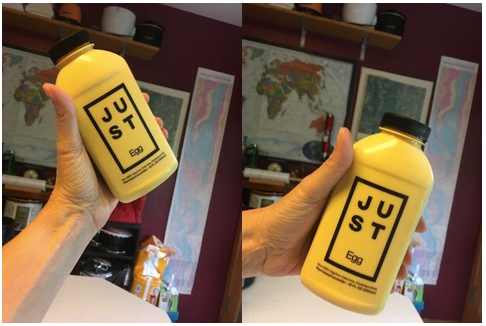 Uncap the Just Egg bottle and pour a little of the mixture into each egg bite compartment, filling each one just a quarter to a third full. (Note: If you want to put some vegan bacon bits in the compartments before this step, feel free, but our experiments have suggested that you should not put any cheese (vegan, of course) in before you pour in some of the mixture.)

Sprinkle some vegan bacon bits and vegan cheese into each compartment. 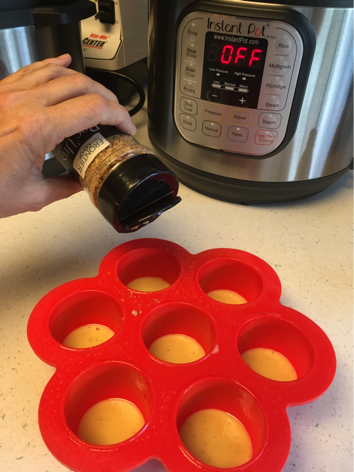 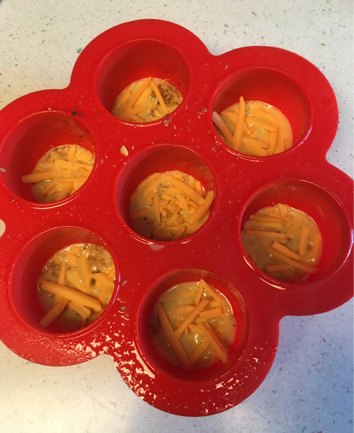 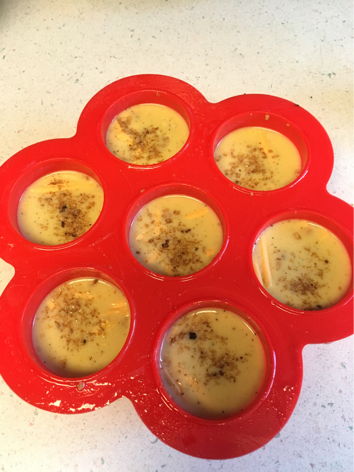 Cover the egg bites mold loosely (do not snap it on, just lay it on top) with the silicone lid, if you have it, otherwise cover it loosely with foil. 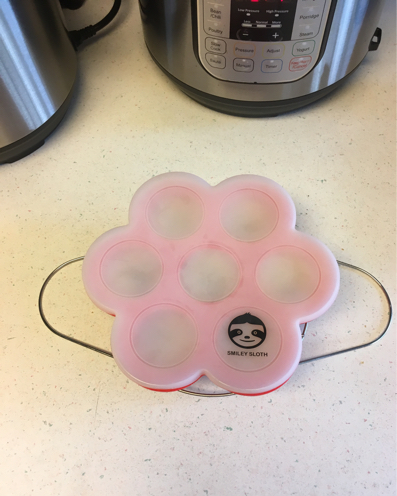 Place 1 cup of water into the bottom of your Instant Pot, and then lower the rack and mold into the IP. (Note: to help it come to temperature more quickly, use boiling water; this is true for nearly all Instant Pot recipes.) 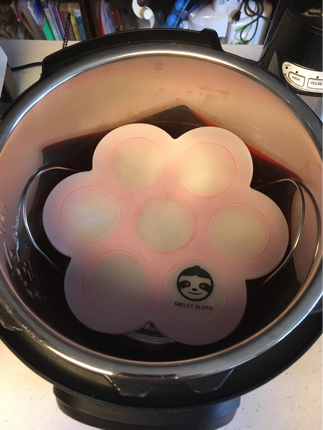 Lock the lid on, and be sure the pressure release valve is closed.

Press the ‘Steam’ button, and set to cook for 9 minutes. With the Steam function, it does still build up pressure (which is why you need to be sure that the pressure valve is closed), but not as much pressure as when actually pressure cooking. 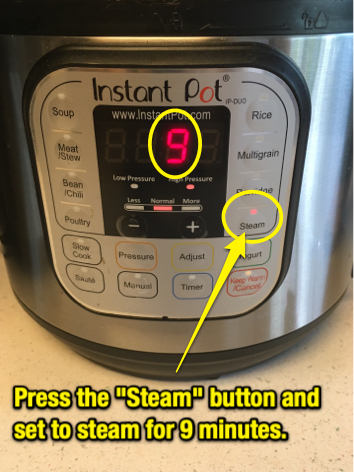 After it is done cooking, let pressure release naturally (known as ‘natural pressure release’, or ‘NPR’) for 10 minutes. Then quick release (‘QR’) any remaining pressure, remove from the Instant Pot, including the rack, and then let cool on rack, uncovered, for another 10 minutes. (Note: to remove the very hot rack and mold from the Instant Pot, we use two pairs of tongs (one in each hand) to grab the handles of the rack and lift it out that way.) 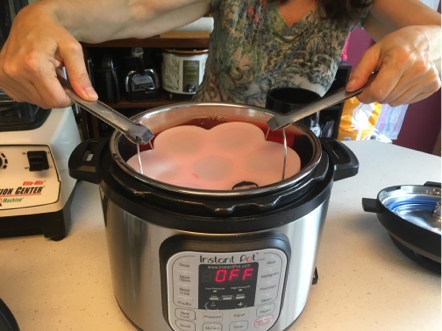 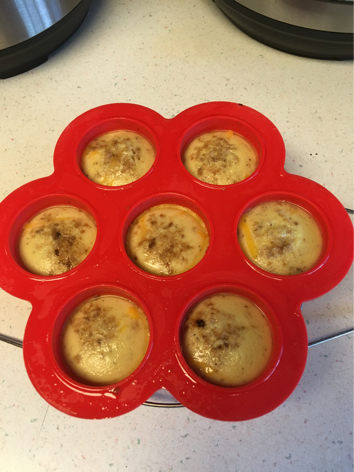 After the egg bites have cooled for 10 minutes, use a spoon to gently scoop them out of the mold and onto a plate. 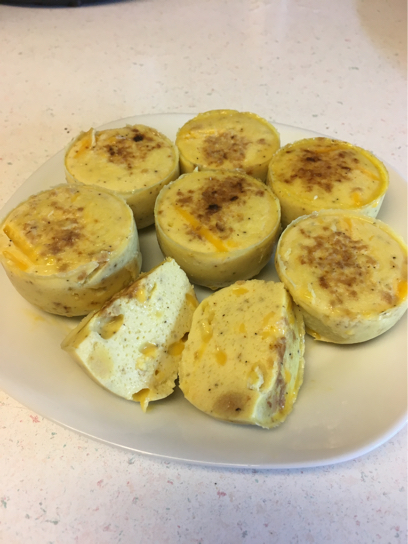