Vegan meringue?? Yes! If you haven’t heard about aquafaba (sometimes spelled ‘aquafava’) you are in for a delightfully shocking surprise! Aquafaba is a perfect egg white substitute that whips up exactly like egg whites, and behaves like egg whites in all sorts of recipes. And, aquafaba is not only readily available at any grocery store, but we bet you have poured it down the drain on at least one occasion. 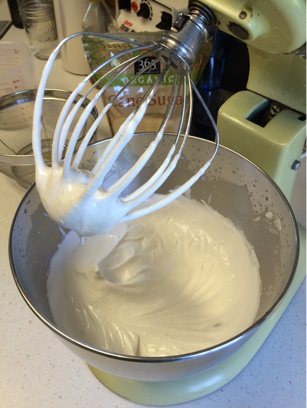 (To learn about how this use for bean liquid was discovered, and how it was named, read Goose Wohlt’s site (he discovered it).)

One can of chickpeas
Sugar

Drain the liquid (this is your aquafaba) from the chickpeas (reserve the chickpeas for some other use) into a measuring cup. You will likely end up with about one-half to three-quarters of a cup of liquid, but it doesn’t matter how much you get, so long as you measure it.

Note I: Some recipes say to beat the aquafaba to stiff peak first, then slowly incorporate the sugar – we didn’t do that, we put both in all at once, and it worked just fine. Your mileage may vary.

Note II: It’s best to put your sugar in a food processor and grind the heck out of it, so that you end up with a superfine sugar. This will make a smoother meringue. But you don’t have to.

For Meringue Pie (read recipe for meringue cookies below): Spread the meringue over your already cooked pie, and bake for 2 hours (approximately) at 200 degrees F. If, when it’s done, your meringue is too pale for your liking, and you want to brown it up a bit, put it under the broiler for just a moment or two (watch it closely, it browns quickly).

You will have extra meringue, so you will also want to make:

Meringue Cookies: Drop the meringue by spoonfuls onto cookie sheets that have been lined with either parchment or brown paper (from a brown paper grocery bag). You can also pipe the meringue with a pastry bag if you want them to look extra-fancy.

Bake for 1 1/2 to 2 hours – you will need to experiment with this the first time to see what works for you, your location and your climate. We are a mile high, and had to bake them for two hours.

NOTE: THEY WILL REMAIN SOFT AND TACKY TO THE TOUCH UNTIL YOU TAKE THEM OUT! So the best way to tell if they are done is to remove one, and let it cool. If it cools to the consistency you want, take the rest out.

Once done, turn off the oven, and leave the meringues in the oven with the door cracked until completely cool.

We were going for fully crisp, so we not only left them in for two hours, but then turned the oven up to 300 – and when we did that, in just a matter of a couple of minutes they turned a slightly darker colour, and then we deeemd them done, and they came out perfectly. 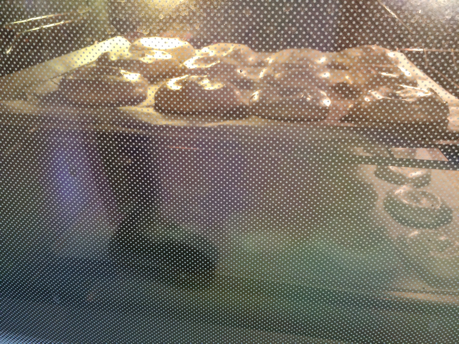 Let us know in your comments how yours turn out!