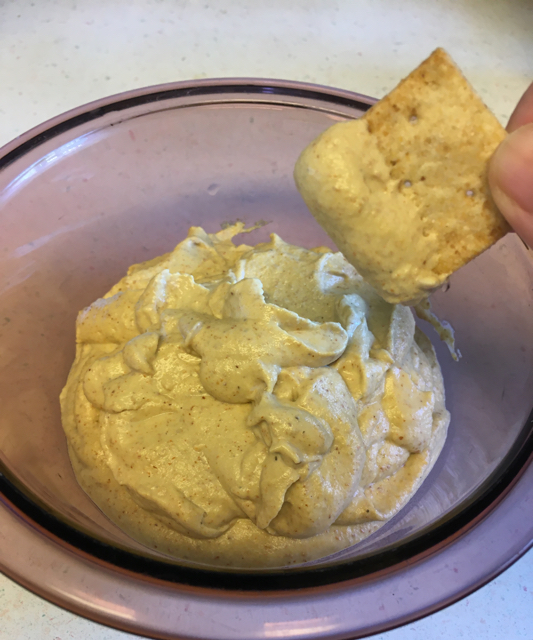 The darling of the Vegan Costco Facebook group, along with the vegan queso (copycat recipe for the Good Foods plant-based vegan queso here), the Bitchin’ Sauce has become a staple in vegan and non-vegan homes alike.

Bitchin’ Sauce legend has it that Bitchin’ Sauce was created by current CEO Starr Edwards, when she was just 16 years old. According to the Bitchin’ Sauce folks, “Starr began making Bitchin’ Sauce in 2004 prompted by a newly acquired vegan diet. The sparky sixteen-year-old was unimpressed by vegan-friendly options which were highly-processed using inferior ingredients, so she set out to make  a cold-processed, raw, creamy concoction. The result was undeniably delicious and totally bitchin’!”

However, Starr has a brother, Ryan Smith, and by his account he was very involved in its genesis as well, especially when they started selling it at farmers’ markets around San Diego.

According to The Voice of San Diego (any Anchorman fans out there?), “Smith and his sister Starr Edwards enlisted their family for help and started getting stores across the state to sell the product.”

But when revenues got to be about $2million a year (in 2015) “That’s when the trouble began ,” says Smith. According to him it was a small disagreement among the family that turned into a legal battle that left Edwards in full control of the business, and the rest of the family out in the cold.

“Imagine going from a six-figure salary to nothing. Moving out of your house with your wife and baby, moving in with your brother and going, what are we going to do?” said Smith.

Well, what he did was founded a new company, GoodLovin, which started out making dips and sauces, and now makes paleo and keto bars (certified organic and vegan).

Anyways, that may be more history than you were expecting, when all you are looking for is to make something akin to Bitchin’ Sauce, particularly as it’s often unavailable, especially at Costco, where a large 24-ounce tub of it costs $10.39, as compared to more than $5.00 for just 8 ounces at the grocery store. 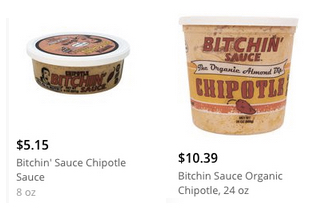 Of course, making it yourself is downright economical, plus gives you full control over both what ingredients go into it, and the quality of the ingredients.

We put ‘spices’ in quotes because of course that’s their way of telling you that they aren’t going to tell you exactly what is in there. That’s another reason that we can’t have it, because for all we know it could have cayenne pepper in it, which, along with lemon (and some other things), we react badly to. Search the Bitchin’ Sauce website all you’d like, you won’t find a disclosure about what those spices are.

With that said, here is our version of a copycat recipe for the Bitchin’ Sauce.

1 cup almonds (ideally soaked in water for several hours if possible, and then drained)
3/4 cup water
1/4 cup light, neutral oil (they use grapeseed, we use sunflower oil, safflower would also work)
1 Tablespoon light vinegar (such as rice vinegar or white vinegar – you can also use lemon juice but we can’t)
2 – 3 garlic cloves
3 Tablespoons nutritional yeast
1 teaspoon liquid aminos or gluten-free tamari
And, of course, spices

Hahaha, we’re not really going to leave you hanging like that about the spices! Here are some spices we recommend, depending on your taste: salt, pepper, ground cumin, paprika, smoked paprika, cayenne, ground chipotle and/or chili powder, but of course the sky’s the limit. If you want to make a copycat version of the Bitchin’ Sauce curry flavor, add curry powder, for example.

What we use is: 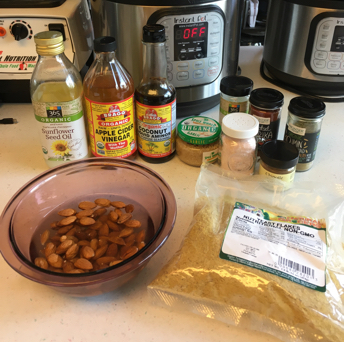 This couldn’t be easier! Put everything in a high-speed blender like a Vitamix, and blend until smooth, starting at low speed, and gradually increasing the speed until it’s at full power. We have found that a food processor doesn’t work for this, although if that is all you have, put everything but the water in, process it until finally chopped, and then drizzle in the water, because if you start with the water in it, unless your food processor lid is water tight, it’s going to make a heck of a mess (don’t ask us how we know that). 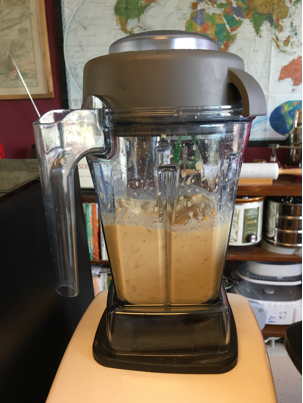 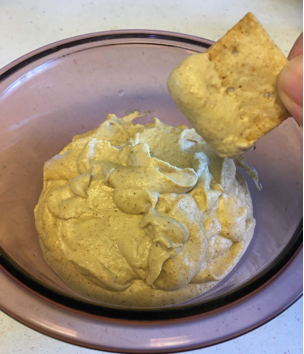