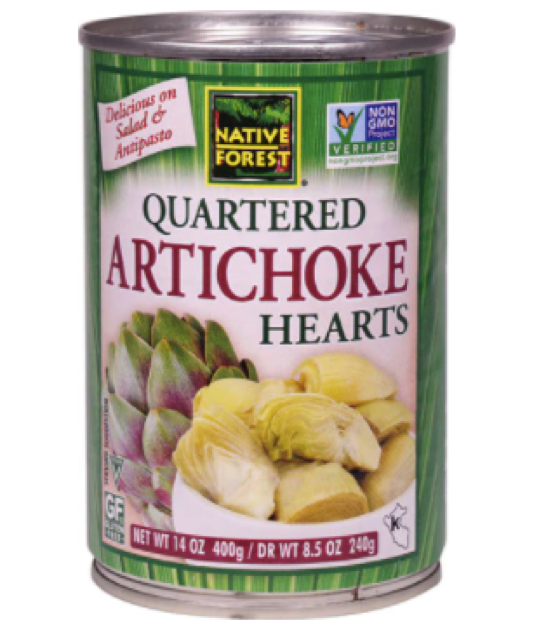 I’ll be honest, this soup came about because I had some leftover artichoke hearts, and some leftover coconut milk, and I thought “Hrrrrm” (picture me looking back and forth from can to can). I wasn’t sure about the flavour of the coconut milk blending well with the artichokes, but by the time the recipe was done, it worked really well (because you also add water, and spices).

You will need a high speed blender, or a good stick blender, to make this soup. 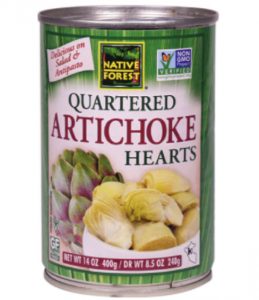 Dump the drained artichoke hearts, the coconut milk (save the can!), the salt, pepper, nutritional yeast and, if you are using it, the lemon juice, in a high speed blender like a Vitamix. Now fill the can from the coconut milk with water, and add that to the blender. Stir it a little and taste it (yes, before it’s blended) to determine whether you like the level of coconut flavor, or would like it be less evident. We wanted the coconut flavor to take a back seat to the other ingredients, so we added a second can of water to the mix, which made it a lighter (thinner) soup, but still delicious. This is up to you.

Turn your blender on, and bring it to full speed.

Blend the bejeezus (yes, that is a technical cooking term) out of it until it is nice and smooth and creamy.

At this point you have two options: you can let it keep blending, and let the friction of the blending itself heat up your soup, or you can turn the blender off and pour the soup into a pot and heat it on the stove. Or, if you are so inclined, you can heat it up in the microwave (ok, so you actually have three options).

Once warm, taste it and adjust the salt and pepper to taste.

This soup makes a nice base to which you can add other things. Some things that you may wish to add include:

Spinach
Once the soup is blended, add a half a can of canned spinach, or a cup of cooked spinach, and blend it again for just a few seconds (you don’t want to puree the spinach, you want it to be bits of chopped spinach).

Water Chestnuts
If you’re in the mood for a tasty contrast in textures, chop up some canned water chestnuts and throw them into the soup just before you heat it. 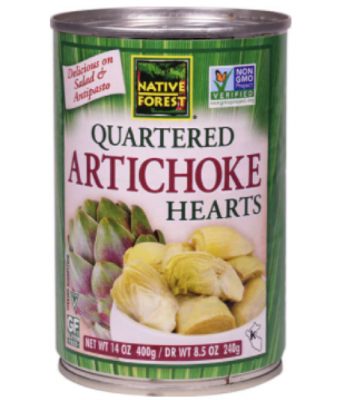 See more recipes in Soups & Stews, Quarantine Recipes, Vegan Costco
Like this recipe? Please let us know by supporting us with a contribution (we use Paypal). We are always free, always reader-supported.

Happy vegans who liked this: 319