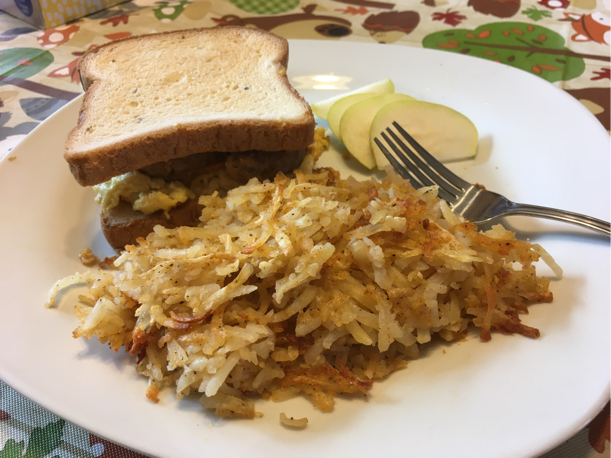 We love us some hash brown potatoes, and we particularly like the shelf-stable cartons of dried hashbrowns (the manufacturer has it as one word even though technically it’s two words) that you can get from Costco. You just open the top of the carton, pour in boiling water, and let it sit for 12 minutes: presto! Enough shredded raw hashed potatoes to feed a small army – if that army is 2-4 people. The carton says it makes seven servings, but c’mon, who do they think they’re kidding? (By the way, if you don’t have a Costco nearby, or if your Costco doesn’t carry these self-stable dehydrated hash browns, you can get them on Amazon here.)

Anyways, as easy as it is to rehydrate those potatoes, we wondered “What if it were just as easy to cook them?” Now true, it doesn’t take a whole lot of effort to fry up hash browns, but what if were even easier? And that is how our oven-baked hash browns recipe was born. Now granted, we are not the first to come up with a way to make hash browns in the oven, but we are the first, so far as we know, to do it the way that we do it.

And doing it the way that we do it produces a wonderful result: nice and tender and moist in the center, with just the perfect golden brown crisper bits on the outside. They are, at least to us, truly perfect.

Plus, all of the main ingredients (all 3 of them, including the potatoes) are shelf-stable! And you can season them with whatever herbs and spices you like! We use salt, pepper, onion powder, garlic powder, paprika, and just a touch of cayenne, but you really use whatever you want!

The one thing that you may not have ready (although we bet that you have it in your pantry ) is aquafaba. Aquafaba is nothing more than the liquid from a can of chickpeas (also known as garbanzo beans). Actually, technically, aquafaba is the liquid from a can of any type of beans, however typically the liquid from a can of garbanzos is used because it’s lighter, clearer, and most neutral in flavor. When we open a can of chickpeas we drain the liquid (the aquafaba) and we freeze it in Tupperware Midgets (if you don’t have your mom’s, and don’t have a Tupperware lady nearby, you can actually buy Tupperware on Amazon now, and you can get a set of 6 Midgets for about $25 on Amazon here). Each Midget holds 3 tablespoons of liquid (one and one-half ounces) plus headroom to allow for expansion during freezing (each Midget actually has a 4 tablespoon – also equal to two ounces – capacity). A lot of vegan recipes use aquafaba as an egg substitute, and as it happens three tablespoons liquid is the equivalent of the volume of one medium egg. Handy, eh?

Preheat oven to 375°. Line a baking sheet with parchment paper, spray with either olive oil or a neutral oil, and set aside.

Mix the hashbrowns with all of the seasonings (but not the liquids yet) until well mixed.

Mix in the aquafaba and the olive oil, and mix well.

Dump the mixture into the center of your parchment-lined baking pan, and pat into a circle approximately 9″ in diameter, and between 1/2 inch and 2/3 inch thick. 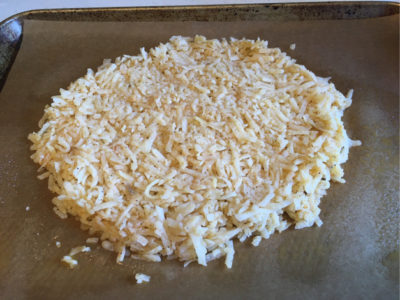 Put in the preheated oven on the center rack and bake for 20 minutes. Your oven-baked hash browns are done when they are golden brown on the top.

Oven-baked hash browns are done when they look like this
Note: The dark spots are just from some excess oil spray on the paper 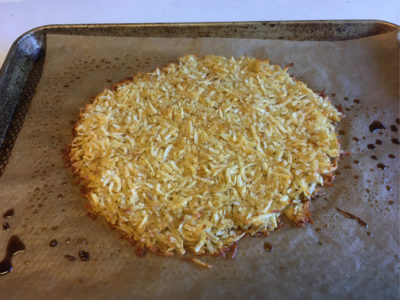 Scoop onto plates and enjoy! (Note that, as some have asked us, you cannot cut them like a pie, they are tender and moist and need to be scooped with a spatula or serving spoon.) 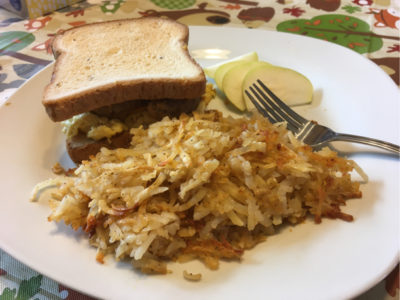 Happy vegans who liked this: 439