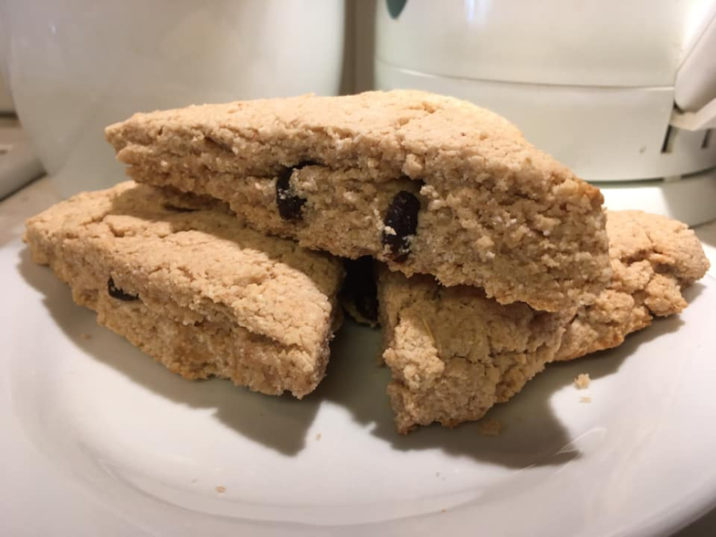 Think that gluten-free vegan scones are impossible? Or that making your own vegan and gluten-free scones is complicated or difficult? Think again, because our vegan scone recipe is gluten-free, easy, uses regular ingredients that you almost certainly already have, and, best of all, it’s delicious! In fact, these scones are (or can be made to be) reminiscent of the maple oat scones of Starbucks fame, if you like!

Now, before we go any further, we have to give credit where credit is due. We were inspired to create this recipe by the fabulous Love & Lemons site, and Jeanine’s Vegan Scones with Raspberries recipe.

These scones are gluten-free because they are made with a combination of home-ground oat flour (uncooked oatmeal oats whirled up in a blender or food processor) and coconut flour. What’s really nice about this recipe is that, other than pulverizing the oats, you can make it in a mixing bowl and with manual utensils. You don’t even need a pastry cutter (also known as a “pastry blender”), you can use the “two knives method”. (You can see a demonstration of the two knives method in this short YouTube video.) Sometimes it’s nice to go old school, mixing by hand, etc., don’t you agree?

After you have made this scone recipe once, we’re sure you are going to want to make it again and again (we sure did)! You can switch it up by using different dried fruits, adding nuts, or changing the spicing (cardamom instead of cinnamon would be yummy)! As we mentioned, you can even make a reasonable gluten-free vegan version of the famous Starbucks maple oat scone (omit any spice, add some chopped pecans, and make a maple glaze of 3 parts confectioners’ sugar or powdered Swerve to 1 part maple syrup – but be careful, that glaze is very sweet, so don’t overdo it)!

Note: Leave the coconut oil and the almond milk in the fridge until just before you are going to mix them in, so that they will be as cold as possible (but not freezing!)

Line a baking pan with parchment.

Whirl the dry uncooked oatmeal (i.e. oats) in a food processor or high speed blender until it turns into oat flour. Measure out 2 cups of the oat flour, and reserve the remaining oat flour for when you pat out the scone dough.

In a large mixing bowl combine the 2 cups of oat flour with all of the other dry ingredients, and mix with a whisk until thoroughly blended.

Remove the coconut oil from the fridge, dump it into the mixing bowl, and cut it in with a pastry cutter or two table knives until it resembles pea-sized crumbs.

Now make a well in the middle of the dry mixture and pour the almond milk and the vanilla into the well.

Using a large spoon, mix until the liquid is fully incorporated and a dough has formed. Put a little of the reserved oat flour on your hands, and knead the dough a few times in the bowl with your hands.

Now sprinkle a little of that reserved oat flour onto the parchment paper, and pat the dough out into roughly a rectangle shape. If it’s easier you can divide the dough into two halves and pat each half out on its own side of the baking pan.

Now imagine an imaginary line dividing the rectangle or rectangles of dough in half the long way. Sprinkle the raisins on one half of the dough, like this: 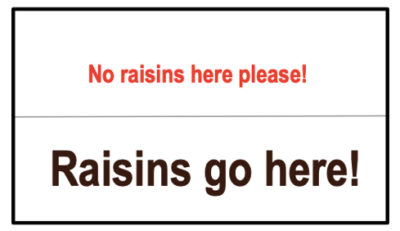 Using the parchment paper to help you, gently fold the non-raisin half of the dough up and over onto the half with the raisins, lining the outer edges up and patting the top down gently. The raisins are now in the center of your scones!

Well, actually right now it’s one giant sconey rectangle. But we’ll remedy that now. Take a sharp, non-serrated knife (the longer the blade the easier this will be) and pressing straight down, cut the dough into six triangles (wedges). Separate the pieces a bit so that air can flow around each piece.

Put in the oven and bake for 13-15 minutes, until the edges are golden brown. Remove the pan from the oven, and let the scones cool for several minutes. Then transfer them to a cooling rack and leave them alone until they are completely cool. This is very important because until they are fully cooled, on a rack, they will be too moist; they firm up during the cooling process.

Enjoy your wonderful scones either plain, or with a glaze, or with a bit of vegan butter and jam! These also freeze well, which we know because we have to freeze them to keep ourselves from eating them all at once! 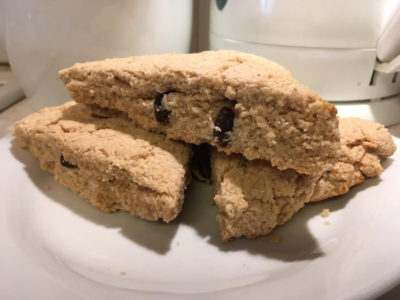 Happy vegans who liked this: 708