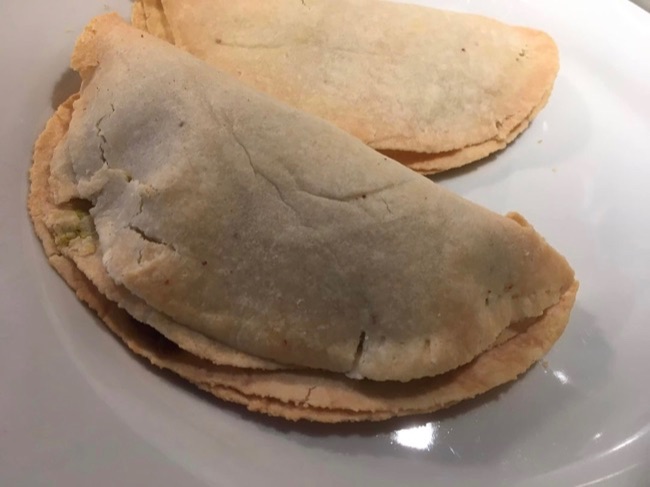 Craving empanadas but they have to be gluten-free vegan empanadas? Our mock empanadas will hit the spot! Why do we call them “mock empanadas”? Well that’s part of why they are fast and easy! Our mock empanadas are made with almond tortillas, specifically the Siete almond flour tortillas that one can get at Costco (although of course you get them elsewhere as well, including on Amazon). For the filling we crumbled up a Don Lee Farms black bean burger (also available at Costco) and added some peas. Easy peasy, literally!

In case you were ever wondering about the history of empanadas (we were!), or whether it is more properly “empanada” or “empañada”, here are the deets. First, to clear up the whole empanada versus empañada thing, it’s ’empanada’ (no ñ). In fact, in Spanish, ’empañada’ means “misted”, as in “the window is misted”, and it actually ends with an ‘o’, not an ‘a’ (“la ventana es empañado”, according to Google translate, and note that we selected a feminine noun just to be sure). This makes sense, as, according to Definitions.com, the term ’empanada’ comes “from the Galician, Portuguese and Spanish verb empanar, meaning to wrap or coat in bread.”

As for the history, according to the Majura Primary School history of empanadas, “Empanadas have their origins in Galicia (Spain) and Portugal. They first appeared in Medieval Iberia during the time of the Moorish invasions. A cookbook published in Catalan in 1520 mentions empanadas filled with seafood among its recipes of Catalan, Italian, French, and Arabian food. It is believed that empanadas and the very similar calzones are both derived from the Arabic meat-filled pies, samosas.”

Well, we couldn’t let that sleeping hand pie lie, so we then looked up the history of samosas, and learned that the samosa is actually not an originally Indian treat, although it did land there. According to Wikipedia, the samosa came from Central Asia; in fact “the earliest mention of the samosa was by Abbasid-era poet Ishaq al-Mawsili, praising the sanbusaj. Recipes are found in 10th–13th-century Arab cookery books, under the names sanbusak, sanbusaq, and sanbusaj, all deriving from the Persian word sanbosag. …Abolfazl Beyhaqi (995-1077), an Iranian historian, mentioned it in his history, Tarikh-e Beyhaghi.” This comports with the history of the samosa at The Better India.com, which is a fascinating read if you want more information on the subject. But for now let’s get on to the recipe!

As we mentioned, we use the Siete almond flour tortilla for this, which you can get at Costco or at your local health food store. You can also get Siete almond tortillas on Amazon. For the filling we use a Don Lee Farms black bean burger (also available at Costco), but you can really use any filling you choose. Having the Don Lee Farms black bean burgers in the freezer means we can whip these up in no time, any time. Next we think we’re going to try making them with a sweet apple filling instead. ;~) We’re giving you the recipe as we make them, but of course feel free to experiment with and change the filling!

Preheat your oven to 350°. Line a baking pan with a sheet of parchment paper.

Crumble the heated black bean burger, and put some on one-half of each 2-tortilla stack. You don’t want to put too much, just enough that when you fold the tortillas over they will be able to stay folded (see picture below). You may have some burger left over, especially if you are adding something else in, like a few peas.

Fold the tortillas over each filling to create your mock empanada. Brush the top of each with olive oil, and take a fork and press down firmly all around the edges. The tortillas won’t actually seal, but pressing down with the fork does put them on notice that you expect them to stay put. :~)

Place in oven and bake for 20 minutes or until edges turn golden brown. Remove and devour. 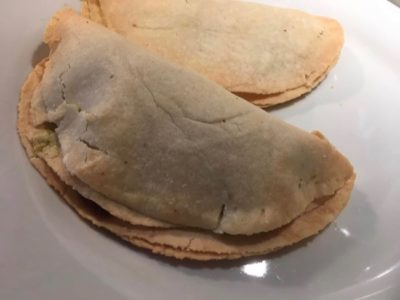 Happy vegans who liked this: 621